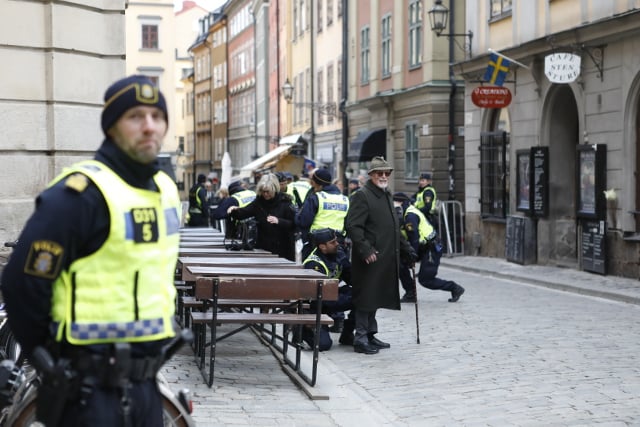 Photo: TT
Four people were killed and 15 people were injured when the truck plowed into crowds on Drottninggatan last Friday.
And with the memorial service being held on Easter Monday, many flocked to Storkyrkan church in central Stockholm to pay their respects.
“I think it feels important to come here for a gathering in peace and quiet,” 63-year-old Monica Rosell, who came from Värmland for the service, told the TT news wire.
Those paying their respects had to pass through tight security patrols, with police on hand around the church.
Sweden's king and queen are scheduled to hold a speech on Monday afternoon, as will Democracy Minister Alice Bah Kuhnke and Arch Bishop Antje Jackelén.
“I think that it's important that we do what is necessary, to allow questions and reactions – and do dig deep into our reserves when it comes to our existential and spiritual questions,” Jackelén told TT.
Elsewhere in Stockholm, city workers on Monday night will take away the flowers that have been left at Sergels Torg and on Drottninggatan. The Stockholm Stadsmuseet has announced that it will be taking some of the flowers for preservation purposes.