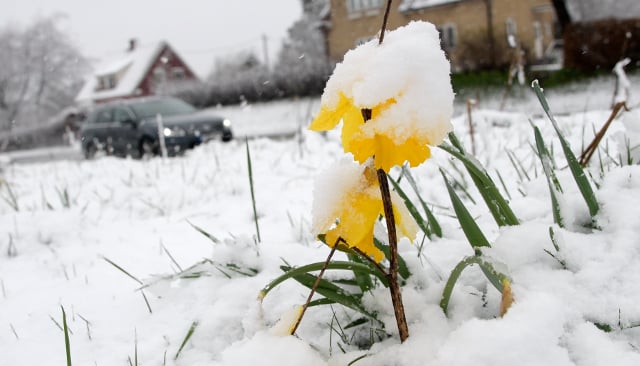 Just when you thought spring was finally here, the Swedish winter asked you to hold its beer and covered the country, even southern parts, in snow over the Easter weekend.

IN PICTURES: This much snow on Easter, you've got to be kidding me?!

But don't worry, it will get better. Just not quite yet, according to weather agency SMHI which issued a warning of strong winds in northern and western Sweden on Friday and a grass fire alert for the east coast.

“It's crap weather in the mountains right now, winds and rain. But this weekend there will be more snow in Jämtland and Lapland. The rest of Sweden can count on rain showers this weekend,” Johan Groth, meteorologist at weather institute Storm, told the Expressen newspaper.

When Swedish spring is cold but you see a small ray of sun https://t.co/zcZtResHr1 #animmigrantinsweden pic.twitter.com/0PpUyTkJ6G

Forecasters expect warmer weather to reach Sweden by the end of April, just in time for next weekend when the country celebrates Walpurgis Night around big traditional bonfires.

“Temperatures will rise around Walpurgis and things should have sorted themselves out by then. As long as the wind settles and the sun gets to do its thing we'll start getting the temperatures we normally have this time of the year,” said Groth.

Spring has officially reached about as far north as Umeå. Sweden considers the warmer season to have arrived when the average temperatures stay above freezing for a week.