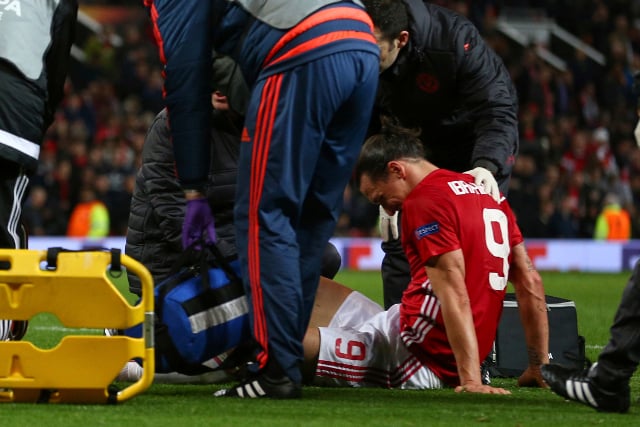 The talismanic Swede, 35, had to go off after damaging his right knee late in the game at Old Trafford and may not play again this season, while United also lost centre-back Marcos Rojo.

United prevailed courtesy of an extra-time strike by Marcus Rashford, which secured a 3-2 aggregate success, after Henrikh Mkhitaryan's opener was cancelled out by Sofiane Hanni.

“I don't think they are easy injuries, but I prefer to wait until all the tests are done and then speak. But the news is fairly negative I think,” United manager Jose Mourinho told BT Sport.

“It is an important title and we have to keep going. Today showed how difficult it is. We are not expecting anything easy in the semi-finals.”

The scrappy, sapping victory means Mourinho's side remain on course to claim the only major trophy missing from the club's collection.

But the injuries to Ibrahimovic and Rojo could prove costly, particularly with United having re-energised their push for a top-four finish in the Premier League by brilliantly beating Chelsea.

Ibrahimovic's injury occurred late in stoppage time, his right knee bending the wrong way as he landed following an aerial challenge in the Anderlecht box, leaving him grimacing on the deck.

The former Paris Saint-Germain striker, scorer of 28 goals this season, was able to hobble down the tunnel, aided by medical staff, but United's fans will fear they have seen the last of him this season.

It cast a shadow over United's evening, but Rashford's superb 107th-minute strike ensured they took up a place in the last four.

Star of Sunday's 2-0 win over Chelsea, he notched the decisive goal by gathering Marouane Fellaini's knock-down, making space with a sharp Cruyff turn and firing in a low shot with his left foot.

United first went ahead in the 10th minute after a finely measured pass from Paul Pogba found Rashford wide on the left.

Rashford's cross was blocked, but the ball came back to him and he squared it for Mkhitaryan, who drilled a low shot into the bottom-left corner.

United were on top and it took flying one-handed saves from visiting goalkeeper Ruben to repel a header from Pogba and a Jesse Lingard curler.

READ ALSO: Zlatan Ibrahimovic says he is 'like Indiana Jones'

United then lost Rojo — hurt as he tried in vain to halt Frank Acheampong, with Daley Blind taking his place – and Anderlecht levelled the tie in the 32nd minute.

Youri Tielemans's deflected shot came back off the crossbar and after a moment's confusion, Hanni put away the rebound.

Elsewhere, fellow Swede John Guidettti's Celta de Vigo reached a European semi-final for the first time in the club's history after a 1-1 draw at Genk gave them a 4-3 aggregate win over the Belgians.

Ajax reached their first European semi-final in 20 years with a 4-3 aggregate win over Schalke after extra time.

And in Istanbul, Lyon beat Besiktas 7-6 on penalties after the Turkish side had won 2-1 on the night to level the tie at 3-3.