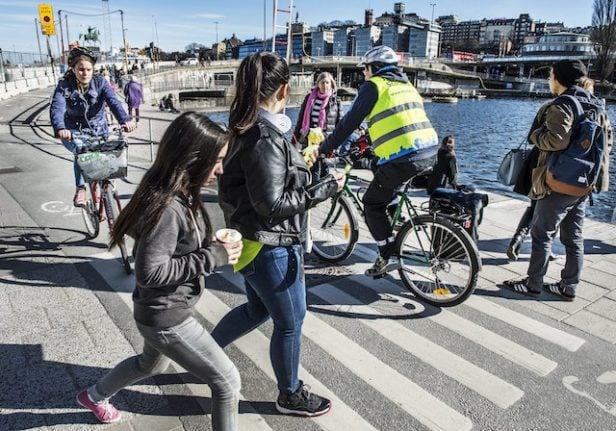 Last year, 301 people were injured in collisions between cyclists and pedestrians, reports Svenska Dagbladet. In 2007, the figure was 207.

This major increase is largely explained by an increase in hospital reports submitted to the Swedish Transport Agency (Transportstyrelsen), but in Stockholm, the huge population increase in recent years could be another part of the explanation.

In 2016, the Swedish capital grew with an average of 33 people per day, according to figures from Statistics Sweden. And more people means more cyclists.

Lennart Adamsson, head of the Trauma Centre at the Karolinska University Hospital in Stockholm, confirms he has seen an increase in collisions between cyclists and pedestrians in recent years, especially in the spring.

“These are often severe skull injuries or neck injuries for those not wearing a helmet. If they've worn a helmet we often don't see any injuries to the head,” he told Svenska Dagbladet.

With the number of cyclists on the rise in Stockholm and other major Swedish cities, the infrastructure needs adjusting, said Lars Strömgren, president of Cykelfrämjandet, a national cycling advocacy organization.

“The traffic environment is poorly adjusted to cyclists, which means it's easy to get confused. It's hard to know when a pedestrian is about to step out into the road,” he told The Local.

“If you look at Copenhagen, it’s completely different. They've been investing in cycling for decades,” he said.

In the streets of Stockholm, space is an issue. In many places pedestrians and cyclists share the same paths, which can lead to accidents – and give rise to conflicts.

“The most important measure to take to reduce the number of accidents involving cyclists and pedestrians is to separate the two,” he said.

Cyclists are often accused of bad traffic behaviour, paying little respect to pedestrians and other cyclists. But Lars Strömgren thinks that poor traffic planning, which leads to confusion, is part of the explanation.

“There are individuals behaving badly within all traffic types. But at the moment in Stockholm, we have cycle paths that suddenly end or just disappear, and it's unclear where you're supposed to go. That leads to stress and irritation,” he said.

In spite of the recent rise in accidents involving pedestrians, Strömgren stressed that cars by far make up the biggest risk for cyclists.

“Separating pedestrians and cyclists is really important. But also reducing the speed limits (for cars) within densely populated areas, as accident rates go down significantly if you reduce the speed from 30 to 50 km per hour,” he said.