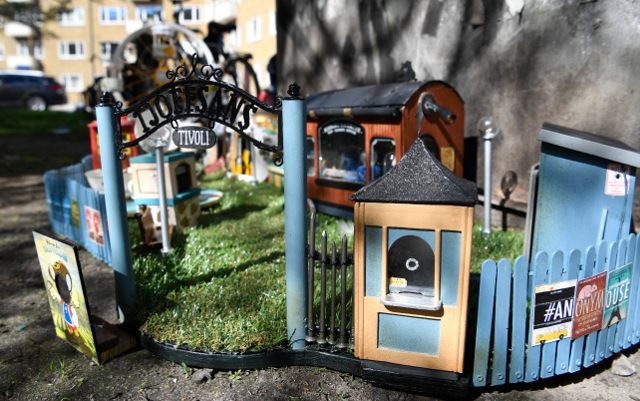 If there was one Swedish story that captured the world's attention more than any other last year, it was the tale of a tiny restaurant and store for mice which appeared on a busy Malmö street in December.

The artists behind it, an elusive bunch going only by the name “AnonyMouse”, told The Local at the time that their next installation would be even better, but then quietly withdrew from the spotlight.

Until now, that is.

On Sunday morning another Malmö attraction opened its doors: an amusement park, sorry, amousement park, for the city's tiny four-legged residents. And the anonymous people behind the artwork have told The Local that they already have a few ideas for their next creation. The mouse funfair is located on Södra Förstadsgatan in Malmö. Photo: Johan Nilsson/TT

Named after a character in a novel by Sweden's most famous children's author, Astrid Lindgren, Tjoffsan's Tivoli is “now welcoming visitors of all ages”, wrote the AnonyMouse creators on Instagram.

It appears to be as detailed as its predecessors and its attractions include a scary ride in the shape of a cat, a tiny popcorn stand, a fortune teller called Madame Raclette, mouse-sized portable toilets and carnival side stall Lucky Cheese where visitors can try their luck.

People quickly flocked to the ankle-level funfair on the Södra Förstadsgatan street on Sunday and Monday, but some of the city's non-rodent residents may have been left disappointed by the minuscule rides.

“The opening of the Amousement park was met with some excitement by slightly larger visitors than expected,” wrote the creators.

“We apologize for the lack of personnel at certain hours, the management are working on a solution. Thank you for your interest and cheese out!”

The previous restaurant and store quickly went viral last year and was picked up by US talkshows, international newspapers and social media users around the world. However, the creators told The Local on Monday that they did not believe they would get the same level of attention this time around.

“We don't think anything we'll do will ever get the same level of attention as the installation on Bergsgatan. It literally was featured around the world. However, so far the reception has been great, so we're not worried,” they wrote in an e-mail, promising that there's more to come in the future. “We haven't actually started with the next one yet, give us a couple of days! But we have quite a few ideas.”

“However, we're going to have to bring it down to size (not to scale). If we started with two (Noix de Vie and Il Topolino) and then expanded to eight (ferris wheel, Madame Raclette, Wheel of Cheese, pool party, teacups, popcorn, cat tunnel plus toilets and entrance), the next one would be, ehm, 20? And that would take forever.”

READ ALSO: Ten ways Malmö's mouse restaurant took on a life of its own