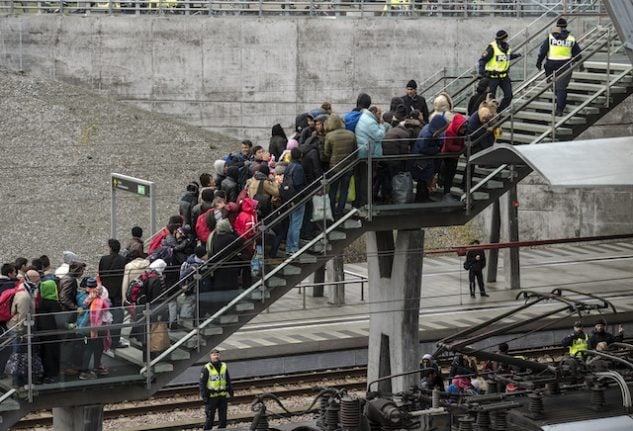 Refugees arriving at Hyllie train station in Malmö in November 2015. Photo: Johan Nilsson/TT
The Migration Agency (Migrationsverket) had forecast a total of 34,700 asylum seekers for 2017, which is somewhat more than the 29,000 who sought asylum in Sweden last year. An alternative scenario which predicts 45,000 people could not be written off entirely, however, the agency stated.
Since spring 2016, the number of applications has stabilized at 1700-2500 per month, the lowest figures since 2012.
“It's mainly a more impenetrable Europe, the agreement between EU and Turkey, border and ID controls, and the temporary law that has led to this development,” Migrationsverket stated.
READ MORE: Sweden implements temporary border checks
The forecast for 2018 is between 25,000 and 65,000 asylum seekers.
Migrationsverket was unable to say what effect Sweden's temporary asylum law has had. The law, which came into force in July 2016 and will remain in place for three years, only grants temporary residence permits to persons who have been granted refugee status, and limits family reunifications.
READ MORE: Sweden's tough new residency laws begin
Migrationsverket aims to process all 163,000 asylum applications from 2016, as well as the 29,000 from 2016, before the end of this year. That target remains in place, even though the forecast of applications that will be processed in 2017 has been reduced from 105,000 to 95,000.
“This is due to the complexity of the cases. We've seen an increase in the share of complex cases concerning Syria, Afghanistan, Iraq and Iran,” said Migrationsverket's director-general, Mikael Ribbenvik.
Meanwhile, Sweden's local authorities are expected to house 82,600 newly-arrived people who have been granted residence permits this year.
“It's a pressured situation. We're getting signals from many municipalities that are having difficulties managing,” Ribbenvik said.
As Migrationsverket is forecast to process fewer asylum applications in 2017 than its original target, the number of deportation cases is thought to land at 24,700, which is 8000 fewer than forecast in February.
The number of people voluntarily leaving Sweden is forecast at 10,500 this year, or 3200 fewer compared to previous forecasts.
Around 2700 deportation cases are expected to be handed over to the police, with an additional 8300 deportation cases expected to be handed over to the police due to the rejected asylum seekers having gone into hiding.