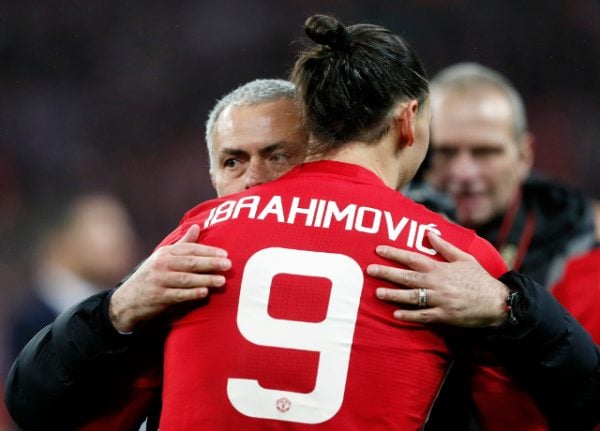 Ibrahimovic, 35, suffered a serious knee injury in last week's Europa League victory over Anderlecht and was due to undergo surgery in the United States this week.

United and Ibrahimovic had been in talks over extending his one-year contract, which expires at the end of the season, but Mourinho would not entertain questions on the player's future.

“I don't know, I don't want to know. I'm not interested in it, I don't care about it,” said the United manager, who also revealed Paul Pogba will miss Thursday's derby at Manchester City.

“I just want the difficult surgery to go and of course we think he's in fabulous hands and (for him to) recover from the injury to prepare himself mentally for the next step.”

“And I think the next step will always be something he really wants, which is what I was saying before the injury in the period of doubts over his future.”

“He's much more important than myself and what I want, it's what he wants. I always want the players to be happy, to choose their future and I think this is what's going to happen.”

“But now, before such an important surgery, I think it's a waste of time to speak about what next.”

Details of Ibrahimovic's injury have been scarce, with United thus far refusing to even specify exactly the nature of the ligament damage.

Early outside estimates have suggested he will be sidelined for nine to 12 months.

Ibrahimovic himself has already publicly stated his determination to play again, posting a photograph on social media within days of the injury to proclaim he would fight back.

It is a prediction with which Mourinho is in wholehearted agreement, even if Ibrahimovic – who played under the Portuguese at Inter Milan – may have played his last game for United.

“The future is a big surgery, a long period of recovery,” Mourinho told reporters at United's Carrington training base west of Manchester.

“But the future is also in the hands of a very strong guy – mentally very, very strong – who wrote immediately on his social media that he will stop when he wants, not when people think.”

“So it looks to be he will not give up and will fight and I'm really pleased with that because that's the Zlatan I know.”

“He fought all his life. That's what I told him: 'You fought all your life since you were born, I don't see a reason for not fighting now'.”

Pogba limped out of Sunday's 2-0 win at Burnley and will miss Thursday's trip to the Etihad Stadium, where victory would take United above City into the Champions League qualifying places.

“Paul? No,” was Mourinho's response when asked about the France midfielder's chances of playing.

Pogba's absence could be a major blow to Mourinho, especially as he still has major problems in defence.

After the Burnley win, Mourinho challenged England internationals Chris Smalling and Phil Jones to hurry back from their injuries in time for the derby.

But the pair have not responded as their manager would have wished and remain sidelined for a game that sees Mourinho renew his fierce rivalry with City manager Pep Guardiola.

Antonio Valencia, however, is in line to return.