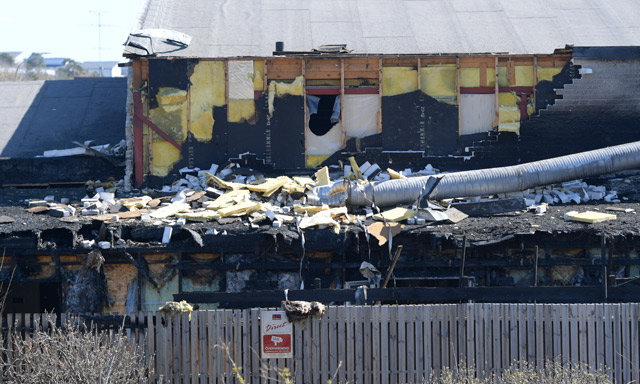 Police were inspecting the full scope of the damage on Monday. Photo: Anders Wiklund/TT
Fire and emergency services were alerted to the scene a little before 12:30am on Monday, where “flames were engulfing the outer facade” of the Imam Ali Islamic Centre in the northern Stockholm suburb of Jakobsberg, a police spokesman said.
No injuries were reported.
“A man who earlier in the day had been arrested and was scheduled for a hearing, was, after interrogation, taken into custody,” police said in a statement.
However, they released no information on the man's identity or possible motive.
“This is Sweden's largest Shia mosque with thousands of faithful… They are really concerned,” mosque spokesman Akil Zahari told broadcaster SVT. Zahiri said that there were a few people in the mosque when the fire was first noticed. A party had been held earlier in the evening.
The fire raged for over an hour but by 3am fire fighters had the flames largely extinguished.
No residential buildings surround the large mosque, so police said there was no risk of the fire spreading to other houses.
Several mosques in Sweden have been the target of arson attacks in recent years but few perpetrators have been caught.
In April last year, a 31-year-old man identified through CCTV footage was jailed for three years for racially-aggravated arson after admitting setting fire to a mosque in the southwestern town of Boras.
Swedish anti-racism campaigners protested in January 2015 after a trio of arson attacks on mosques in the Nordic country.
In Stockholm, residents are still coming to terms with an April 7 truck attack which killed five people.
An Uzbek national confessed to using a stolen truck to mow down pedestrians on a busy shopping street in a rampage similar to attacks in Nice, Berlin and London.