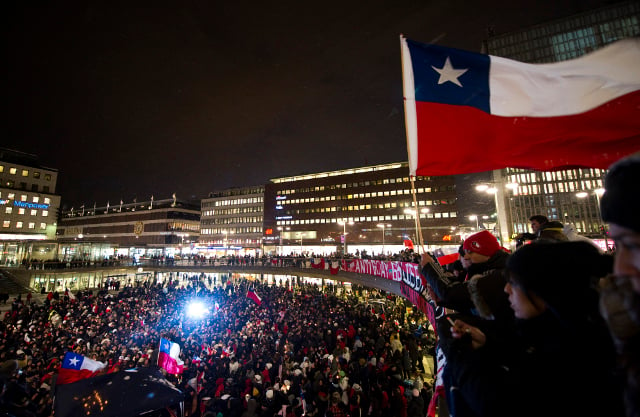 Chilean Swedes holding a memorial in Stockholm for the victims of the 2010 Chile earthquake. Photo: Henrik Montgomery/TT

People of Chilean background account for a group of at least 50,000 in Sweden therefore – more than people of Afghan heritage (around 35,000) and comparable to those from a British background (around the 50,000 mark). That's only those officially registered as living here: the Chilean government estimates the number is more likely to be around 60,000.

It's a significant number, so why is the group so rarely talked about? Cristian Delgado, a member of the board of directors of the Swedish-Chilean association, thinks the explanation is simply that Chileans are now so well integrated into Swedish society that no one really notices them.

“When people ask me which group is best integrated in Sweden I say the Chileans. Without a doubt, looking at it. We have a lot of qualities that are fairly common with the Swedes – apart from our hair and eyes,” he told The Local. Most of the Chileans in Sweden came to the country in two different waves. Prior to Augusto Pinochet's dictatorship, Chilean emigration to Sweden was virtually non-existent. The 1973 overthrowing of socialist president Salvador Allende quickly changed that however: thousands of political refugees with the socialist sympathies Pinochet persecuted rushed to Sweden.

Their choice of destination was largely because of Olof Palme's Social Democrat government. The Swedish administration gave 60 million kronor of financial support to Allende's socialists between 1972 and 1973, and at the time Sweden was considered to be the Chilean leader's strongest European supporter.

“They came due to their political convictions and what was happening in the country. A large amount of them were intellectuals. I'd not generalize, but many of them were highly educated and people of political importance, and fled because of that,” Delgado explained.

“Many of them stayed here. They probably thought they'd return back to Chile, but many made families here, had kids, married Swedes.”

READ ALSO: Palme's opposition to Pinochet part of political legacy that 'put Sweden on the map' A similarity in values, and a warmth towards Chileans from Swedes at the time helped them to settle in, he noted:

“We have a culture that's fairly similar to Sweden. We're generally people with a big heart, easy to get on with, and there was also a democracy in Chile similar to Sweden's, similar infrastructure. A lot of people came from a leftist movement, and here Palme was in power. There were many things that meant the Swedes opened their arms to immigration from Chile.”

“We're secular here in Sweden, and also a lot of the people who were leftists (from Chile) were maybe not so religious anyway,” he added.

It wasn't all clear sailing however. Learning Swedish, a Germanic language, proved to be a struggle for many of the Chileans who had been immersed in their version of Spanish, a romance language. And that can still be heard to this day:

“It's a language that's pretty difficult for many Chileans. Some that came back then still have a bit of difficulty with it. So you notice that they're people who come from a different language (when they speak Swedish). I even know people who are professors here and still have that.”

Going from having a highly skilled job in Chile to working in more basic fields in Sweden was not straightforward either.

“Another challenge was accepting that you're coming as someone who has been put out. Maybe you had a good job, you were well educated, and it didn't count when you came here. You had to work as a waiter.” The next wave of Chileans who fled to Sweden were different. Those who came in the 1980s were not political exiles, but people looking to escape the poverty that had grown in Chile during Pinochet's dictatorship for a better life in the Nordic country. Economic conditions and the standard of living in Sweden were highly favourable by comparison.

“In the 80s something different happened. The new group came really because the country was suffering – people were trying to escape for a better life, and were looking for better social conditions, because the economic oppression in Chile at that time was very strong,” Delgado pointed out.

“Many of them weren't educated but wanted a better life, and Sweden gave them that. There was work. You came, you got a job. That's hugely important. It also means you enter society more quickly – you meet other immigrants, your common language is going to be Swedish, so you need to learn it to talk to them.”

The return to democracy in Chile at the end of the 1980s brought an end to the large waves leaving for Sweden, and while some opted to return back across the Atlantic, many decided to stay in their new Scandinavian home. Chileans in Sweden are perhaps most visible these days when celebrating a major sporting triumph like their two recent Copa America wins, or when asked to come together in support of humanitarian causes like the 2010 Chilean earthquake. But even if Chileans have integrated particularly well, Swedish society now needs to do more in order to move on and help that process further, according to Delgado:

“I say I'm from Sweden… People look at your colour of hair, eyes. I have two kids here: they have Chilean parents. When they're older, if Swedish society doesn't change, they're going to be asked that question. What are they going to say? They'll learn Spanish from their parents – it won't be perfect – and there's going to be an identity conflict there. Because of their name, because they have certain eyes, hair.”

READ ALSO: How is Sweden trying to solve its integration challenge?