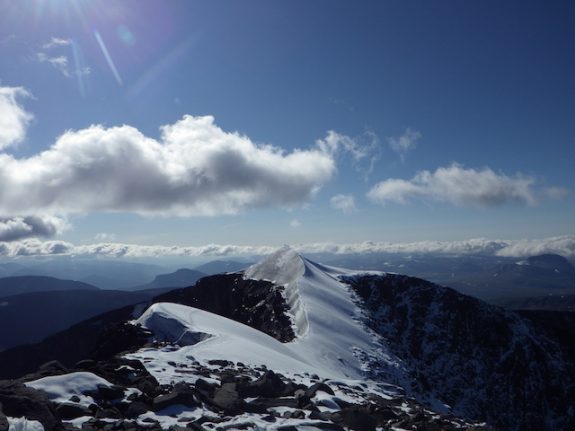 The southern peak of Kebnekaise. Photo: Stockholm University/TT
The man had called the emergency services at 11.22am from Kebnekaise, located in northern Lapland. He said he was stuck in a steep pass, and was unable to move upward or downward, the police stated.
READ ALSO: Multiple helicopters and a snowmobile make dramatic rescue from Sweden's highest mountain
The rescue team was able to reach the man approximately three hours after he had alerted emergency services.
The mountaineer, who was not said to have been injured, was brought further down the mountain to a rescue helicopter.
At 4.30pm the police said the man had been brought to safety, reported local newspaper NSD.
Kebnekaise's southern peak (2097.1m above sea level) and northern peak (2097m above sea level) are the two highest points in Sweden. The southern peak has had a habit of dropping in height for some years now however due to rising temperatures shrinking the glacier which forms its top.
READ ALSO: Top five tips for climbing Kebnekaise