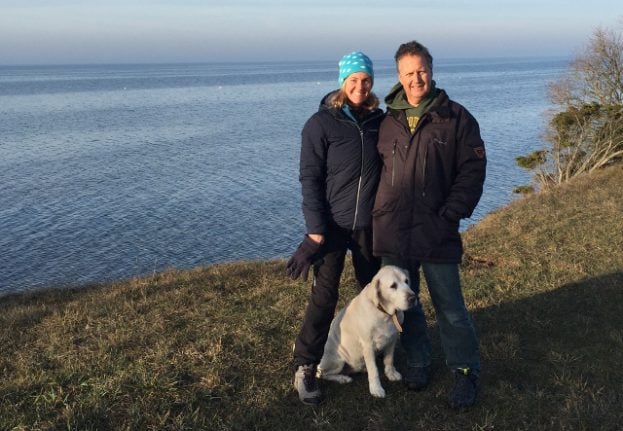 It is no understatement to say that Chris Cockfield, 53, has seen the world. The American grew up in Connecticut and moved to Florida to work on board luxury yachts, a hard-working but adventure-filled job which for decades took him to all the dream holiday destinations anyone could think of.

But to him, there is one place that beats them all: Öland, where his Swedish wife Agneta grew up.

The couple met in Florida in 1988. Cockfield was first officer on a yacht, she was there to visit a friend. Later, she ended up joining him on board the yacht and they spent years sailing the world.

“When you work in yachting, especially as a couple, you always get asked what you're going to do when you get out, and the answer is usually, well, we'll open a bed and breakfast,” he explains.

So fast-forward almost 20 years and that's what they did. But it was not completely straightforward. On their travels they had found many countries they would be happy to settle in and call home, and they almost started their business in places as diverse as South Africa, Costa Rica and Florida Keys.

But when an old farm house owned by Agneta's grandparents at Mellby township on the island of Öland, Sweden's second-biggest island, became available, it was not a difficult choice to make.

“We had been coming here every year for vacation. I love the island. I think it's a unique and spectacular place. As a yacht captain who has travelled the world, there's nothing to compare it to.” An old photo of Agneta's great grandparents at the main building. Photo: Private

It took two years to convert the old 1860s building into a guest house and Mellby Inn opened for business in 2009. A lot of the work they did themselves, being used to the work from their yachting career, which involved tearing the boats apart for maintenance and putting them back together.

“I love this kind of work. Many times it was 'what have we taken on?' but we were prepared for the hard work. It is still an ongoing project, I still have three barns to work on,” laughs Cockfield. Öland is Sweden's second-largest island, separated from the mainland by a bridge to Kalmar. It stretches out 137 kilometres from north to south, with its widest point being only 16 kilometres.

Home to the Royal Family's summer palace, it is a popular tourist destination in Sweden, but tends to end up in the shadow of its larger Baltic Sea neighbour island Gotland, at least internationally.

“If I have a complaint, it is that Sweden doesn't advertise itself as well as it should. This island is woefully underdeveloped for what it could be for tourism,” says Cockfield, not as criticism, but more as a way of wishing that even more people in the world would discover his adopted home.

“The south part of the island looks like an African plain or the Everglades. I can still drive around this island and find things I haven't seen and go 'how is it possible that I haven't seen this before?'”

A picture of an old windmill on Öland. Photo: Tina Stafrén/imagebank.sweden.se

The inn looks out on Stora Alvaret, The Great Alvar, a large limestone plain full of rare plants and species and historic settlements, with archaeological traces dating back to the Paleolithic era.

“You can literally walk through thousands of years of history… It's great if you're into archaeology, geology, biology… And that's all on one island – you can't find anything like this elsewhere,” says Cockfield. “I don't understand why people who do come here mostly only come in summer. It baffles me.”

He adds that the tourist organization on Öland has been stepping up its work to promote the island. As for Mellby Inn, it tries to attract visitors all year round, including projects such as yoga retreats and promoting bird watching tours – or just regular pub nights for both temporary and permanent residents.

“Our idea is not to cram people into July but spread them out over the year,” says Cockfield. “I think we've made a big impact on the local community and have become the local gathering place. We have pub nights every Friday during the winter.”

And while you may think that someone who's once been bitten by the travel bug will never be able to stay in the same place for long, the former yacht captain is firmly convinced that Öland is home.

“There's no other place in the world where you can live and have all the benefits but none of the downsides. It doesn't get any better. The schools are excellent, the healthcare is great,” says Cockfield. “I can get to Kalmar in 45 minutes or Copenhagen Airport in four hours, but I don't go over the bridge unless I have to, I just love it here.”

“People ask if I ever miss yachting and I don't, but if I could go back in time I would do it again. It was the perfect job then, but you're talking about a five-star hotel that can sink and then there's sharks. At least here everything's stable,” he laughs.