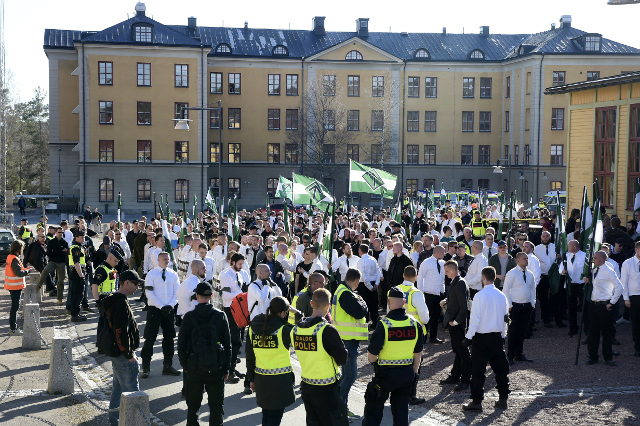 The Nordic Resistance Movement held a march in Falun on May Day. Photo: Ulf Palm/TT

On May 1st around 500 people took part in a march by neo-Nazi group the Nordic Resistance Movement (NRM) in the central Swedish town, and the municipality judged that the risk was high enough to justify moving 50 residents as well as staff from a shelter for lone refugee children in the area to another location for a two day period.

“It was a collective assessment that was made. We didn't want to take any risks,” Falun municipality's coordinator for child refugees Kjell Nordqvist told broadcaster SVT.

While no specific threat against the shelter was made, the municipality considered links between the NRM and home-made bomb attacks on centres for asylum seekers in Gothenburg from earlier this year to be enough to justify taking the precaution.

“Because we know there are links between the NRM and the bombings that occurred in Gothenburg against refugee centres not long ago, we were obliged to act,” Nordqvist said.

READ ALSO: Anger in Sweden over neo-Nazis' May Day march

In January a Swedish Migration Agency (Migrationsverket) staff member was left seriously injured after a home-made bomb exploded in a container outside a centre for asylum seekers in Gothenburg.

Three men with links to the NRM were remanded in relation to the explosion, while they are also suspected of being involved in the planting of a different device outside temporary housing for refugees in the city, as well as a further bomb that exploded in Gothenburg last November.

There appears to be a political motive behind the attacks, according to Swedish intelligence service Säpo.

Last week, Swedish anti-racism foundation Expo's annual report on white supremacist groups in the country documented 3,064 instances of activity by them in 2016, the highest number since the yearly studies started in 2008.

The NRM was responsible for the majority of that activity, according to Expo.

“They're at the most extreme end of this white supremacist area. There's a lot of crime associated with them, they have a relationship with violence. We carried out a study last year that showed around half of them have been convicted of some kind of crime, and about a quarter convicted or indicted for violent or weapons crimes in 2015 alone,” Expo researcher Jonathan Leman told The Local.