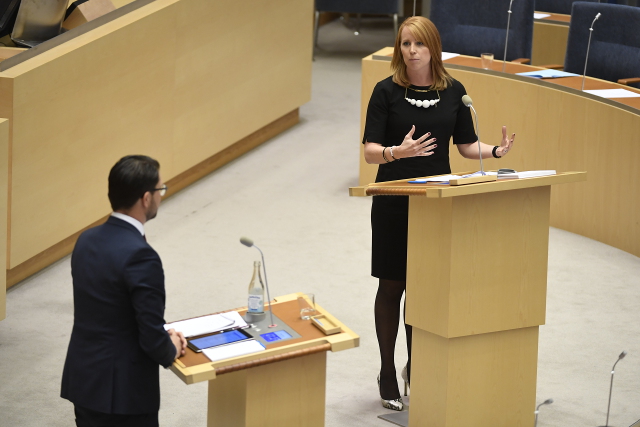 Broadcaster TV4's new poll of polls takes in data from nine different opinion surveys. Based on present public opinion, the most popular party in Sweden is the Social Democrats with 27.8 percent. That's no huge shock, but it's the continued changes in the make-up of the runners up that looks significant.

According to the poll, the second most popular party is the anti-immigration Sweden Democrats with 19.3 percent (up from 12.9 percent in the 2014 election), while the Moderates – traditionally Sweden’s main rival to the Social Democrats – are polling third with 17 percent (down from 23.3 percent in 2014).

“SD are polling better than their performance in the last Riksdag election, but it looks like their improvement has levelled out in the last year. Like many other European countries Swedish politics has changed,” Linné University political scientist Magnus Hagevi told The Local.

“Above all it's to do with the economic left-right questions (taxes, role of the state, economic equality, size of the public sector) now having competition from a cultural values factor, between liberal v authoritarian values, in which migration policy as well as law and order play a big role,” he added.

Along with SD's rise, another big sign of that change is the Centre Party, who have more than doubled in popularity and are currently polling at 12.8 percent, compared to taking 6.11 percent of the vote in the 2014 election.

That can be seen as part of a broader shift in Europe, most recently exemplified by Emmanuel Macron's win in the French presidential election, where centrist parties are starting to gain ground:

“There's a centrist/liberal flow in recent parliamentary elections in Europe: in the Netherlands, in France, and in different state elections in Germany (which could indicate a corresponding tendency in the September Bundestag election). In Swedish opinion polls a similar tendency can be seen in the Centre Party's upturn, mostly at the cost of the Moderates.”

The Centre Party's gains have largely been sparked by the popularity of their leader Annie Lööf, who in a recent DN/Ipsos poll was even judged by Alliance voters to be a better choice for PM than Moderate leader Anna Kinberg Batra.

Lööf has managed to successfully position herself as a clear opposing voice to populists SD, exemplified by her tweets in the aftermath of the French election, where she made an effort to compare her liberal credentials with fellow anti-populist Macron.

Should the current trend continue and SD do well in 2018 while the Moderates under-perform, the latter party would be asked a tough question about whether cooperating with the nationalists is worth the risk in order to hold some kind of influence.

That is something they have flirted with already this year, and it exposed a growing divide in Sweden's opposition that further suggests we're heading for a changed political climate in the Nordic nation.

The Centre Party could also end up in an influential position then, and not a simple one, given their anti-SD but also anti-Social Democrat stance:

“In addition to being critical of the Social Democrats, they're even more critical of the Sweden Democrats. Much suggests that it will be difficult to form a Riksdag majority in 2018 without those parties being included in it, and how the Centre Party will then act is unknown. Leading Centre Party politicians have indicated they may be prepared to cooperate with the Social Democrats on some issues, but a normal governmental partnership between them doesn't seem likely at present.”

So in other words, after a string of tense elections across Europe in recent years, right now it looks like next year's Swedish general election will be no different.