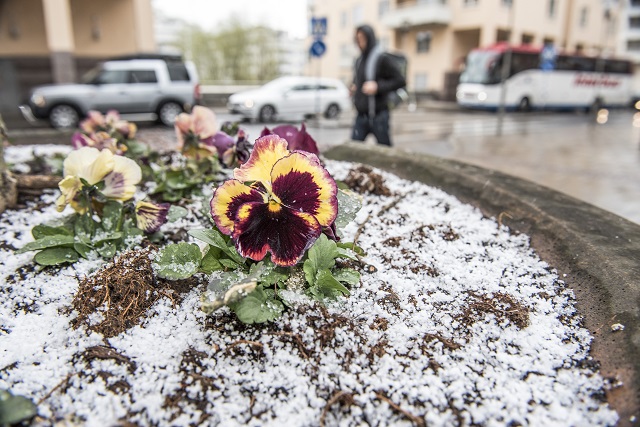 Snow in May. Photo: TT

In Skellefteå, the southern entry to Swedish Lapland, the locals are used to snow – but usually not in the middle of May.

On Sunday morning however, residents woke up to a coating of the white stuff after 10cm of snow fell overnight.

SVT meteorologist Joel Mellin said the weather conditions were unusual for the time of year, but that there was no further snowfall predicted in the area over the next ten days.

In southern Götaland, meanwhile, unseasonably warm temperatures meant that in some areas the summer outdoor bathing season has already begun.

On Saturday afternoon, Hallands Väderö, Malmö and Helsingborg all saw temperatures rise to more than 19C.

“The heat is out of the ordinary, “says Sofia Söderberg, a meteorologist at Sweden's weather institute SMHI.

In the rest of the country, temperatures were between 10-15C, except in northern Norrland where they lay between 0-10 degrees – slightly below normal for the time of year.

A slight drop in temperatures is predicted for the start of next week, followed by rain from Wednesday and Thursday – welcome news for the country's farmers.

In large parts of Sweden, SMHI still warns there is a possibility of grass fires, mainly in Svealand and southern Norrland. Several municipalities have also introduced irrigation bans due to low groundwater levels.