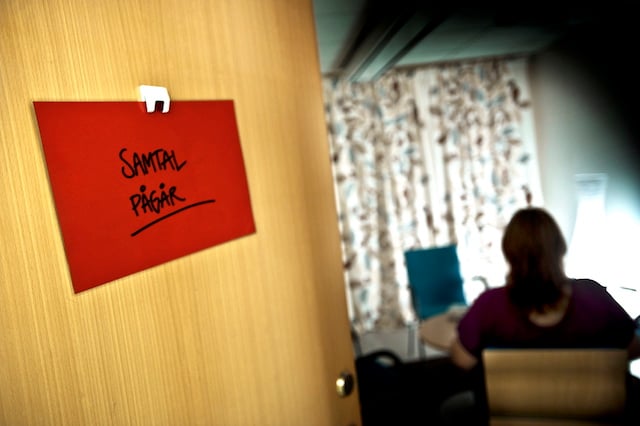 Those councils who did offer support to people who had been involved in violent extremism mainly did so through conselling. File photo: Yvonne Åsell/SvD/SCANPIX/TT
Out of 224 Swedish councils that took part in a survey from the National Board of Health and Welfare (Socialstyrelsen), 45 (20 percent), said they had been in contact with children or young people who were either involved in, or risked becoming involved in, violent extremism.
Out of those 45 councils, only 27 had offered support to the individuals affected via local social services, most commonly through counselling.
Peder Hyllengren, a terrorism researcher at the Swedish Defence University (Försvarshögskolan), said the outcome of the survey was 'worrying'.
“It means that in almost one in two cases the social services don't take any measures when they encounter these people. In that, there's a risk that society misses people who could be dangerous,” Hyllengren told The Local.
“It also shows that a lot remains to be done in Swedish local councils in order to handle these potentially dangerous people.”
READ ALSO: Swedish cities investigate new anti-terror measures
The majority – 37 of the 45 councils where there had been contact with extremism – said they had encountered religious extremism. 15 had come across political extremism.
While terror trips to Syria have largely ended, problems on the local level appear to be on the rise, according to Hyllengren. And one of the main difficulties when it comes to the work against violent Islamist extremism is that it is largely concentrated to certain councils in Sweden, he said.
“In those places, it's particularly important that the preventive work functions the way it's supposed to. And you don't really get an idea of what that looks like based on this survey,” said Hyllengren.
The social services mainly receive information about young people being involved in extremism through tip-offs from schools and after-school clubs, and through reports from the police.
“Both the schools and the police have got better at highlighting these issues, it has become almost twice as common for the social services to receive their information from them compared to the previous year,” said Olga Gislén at Socialstyrelsen.
However, in light of the recent terror attack in central Stockholm, Hyllengren thinks a more active approach to preventive work is needed, for instance through outreach programmes.
“We have quite a long way to go before we reach the way they work in other countries with outreach activities. I think something of a culture change is needed in Sweden, for the social services to reach out actively to these individuals,” Hyllengren told The Local.
READ ALSO: Sweden to consider tougher anti-terror laws