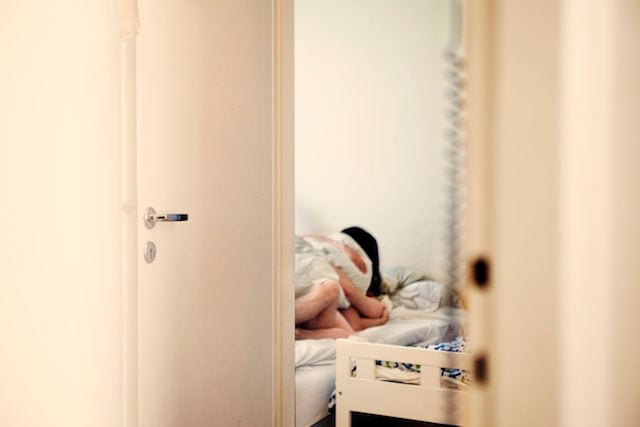 None of this at work, please. Photo: Linda Forsell/SvD/SCANPIX
Swedes should take a one-hour paid break from work to go home and have sex with their partners, a local councillor in the northern town of Övertorneå suggested in a proposal aimed at improving people's relationships earlier this year.
The councillor, Per-Erik Muskos of the Social Democrats, proposed that all council employees and residents of Övertorneå should be given the opportunity to devote one hour per week to having sex, without losing pay.
“It would be great, wouldn't it, to go home during the day and have an extra hour for sex when the children aren't at home. People today have such busy lives, and sex is in short supply for many,” Muskos told local TV channel SVT Norrbotten after he presented the proposal in February.
Another reason why an hour's paid sex was a good idea, he suggested, was the small town's ageing population, which could do with a boost of new babies.
READ ALSO: Here's how much (and where) Swedes masturbate
But now, the local council's slightly more conservative politicians have voted against the proposal.
Mayor of Övertorneå Tomas Vedestig told SVT Norrbotten he thought employers should stay out of their employees' sex lives.
“It's not for the council to interfere in,” he told SVT.
When the proposal was presented, it caused headlines across Sweden as well as internationally, and the mayor was pleased to see the story come to an end.
“I don't know how many journalists from how many countries have interviewed me. Even the BBC got in touch, and Donald Trump has mentioned the proposal,” Vedestig told SVT.
“The proposal has taken energy and focus off other important political issues in Övertorneå council,” he said.
READ ALSO: Swedish minister defends neighbours' loud sex act