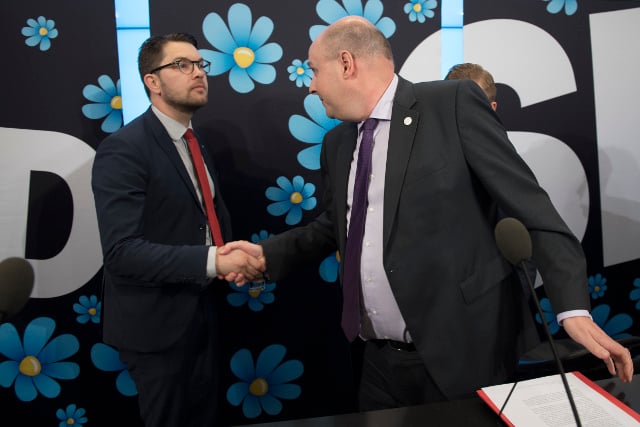 Earlier this week Reslow announced that he had left the Moderates for SD after 34 years as a member of the former, doing so at a press conference with SD leader Jimmie Åkesson. An MP since 2010, he said he had been unhappy with the (now defunct) 'December agreement' the opposition Alliance forged with the Swedish government in 2014 in order to prevent SD from holding the balance of power in the Riksdag.

The Moderates paint a different picture however, saying he left because he was running the risk of not being high on their party list for the Riksdag election in 2018. In Sweden, Riksdag elections use a party list system, where voters can indicate a preference for a particular candidate on a list, or if they do not want to express a preference for an individual but rather, a party, then the candidate is chosen depending on their position on that list.

According to political scientist Li Bennich-Björkman from Uppsala University, Reslow's move is proof that attitudes towards SD are changing in some quarters.

“It shows that SD has become an alternative for Moderates in a completely different way than before, and that in immigration policy they are closer to each other today,” she told The Local.

“It shows that SD have been broken in now on a more general level, and are on the map in a way they weren't before. In the past it would have been outrageous.”

In January, the Moderates broke a long-standing political taboo by opening the door to cooperation with SD, causing a rift between the parties in the centre-right opposition Alliance.

Indeed, Swedish PM Stefan Löfven was quick to try and use Reslow's defection as evidence of the Moderates becoming more like SD, telling news agency TT that it is “an acknowledgement of what the Moderates have embarked on, normalizing the Sweden Democrats a bit more” and that for SD it is part of a desire to “wash away the mark and background they have as a party with Nazi roots, a racist party”.

But Lund University political science professor Anders Sannerstedt, who specializes in SD, was cautious when asked by The Local if he agrees with the two parties are increasingly similar entities.

“I wouldn't say that the Moderates and SD are beginning to resemble one another, but you can perhaps say the distance between them has reduced. The Moderates have changed in their immigration and refugee policy since (former PM) Reinfeldt's time, in part as a result of the large number of refugees from the autumn of 2015. And (Anna) Kinberg Batra has also suggested she could imagine governing in a minority Alliance government with the support of SD,” he noted.

SD leader Åkesson was understandably keen to play up the significance of Reslow's defection at his press conference, calling it a “major addition” and saying he hopes more follow. But Sannerstedt is sceptical about how important it really is, pointing to a past example:

“It's rare for voters to react to someone leaving a party. It won't necessarily harm the Moderates, especially as Reslow is not well known and didn't have any kind of strong position in the party”.

“The fact is this already happened around 15 years ago, when an old Moderate who is also from Malmö, Sten Andersson, went to SD. He was however far better known in the party than Reslow,” the Swedish politics expert added.

Where the two political analysts do agree however is that the news fits a wider atmosphere of perceived disarray among the Moderates at the moment, which other parties have the potential to gain from. Kinberg-Batra's party has been polling poorly in recent months, while fellow Alliance member the Centre Party is improving in the polls.

“It contributes to the impression that the Moderates are in a bit of a mess. That could potentially benefit the Centre Party,” Sannerstedt observed.

“It's clear that the Centre Party have gained from the Moderates opening up to SD: they have to lure sympathy from both disappointed Moderate voters, and disappointed Green Party voters,” Bennich-Björkman concluded.

When the document was published last month, the Sweden Democrats described Gustafsson, a researcher based in Uppsala, as ‘independent’, stressing that he had been able to carry out his research without interference from the party.

But the Expressen newspaper revealed on Monday that Gustafsson had in fact joined the party he was supposed to be investigating back in 2017.

Confronted with this, Gustafsson told the newspaper that he “would not comment on my political position or background at all in relation to this project”.

“I have chosen not to let my ideological commitments, political standpoints, or current membership, be a part of the discussion,” he said.

In a press release, which has since been taken down from the party’s website, the party said that the report gave “no support for the idea that the party was part of the fascist movement.”

“The report suggests rather that the party and the associations which predated its establishment were in conflict with those extreme movements that then existed and that didn’t at all want to see a new movement to develop on democratic grounds,” it read.

Martin Kinnunen, the Sweden Democrat MP who was responsible for the project, in July said that the project had been “the most transparent ever launched in Swedish politics”.

On Monday, he said he had been unaware of Gustafsson’s past party membership. “We don’t go and dig around in our register, and don’t keep information on who has formerly been a member of the party, but instead have to delete it because of [the EU’s] GDPR rules.”

He reiterated that Gustafsson was politically independent.