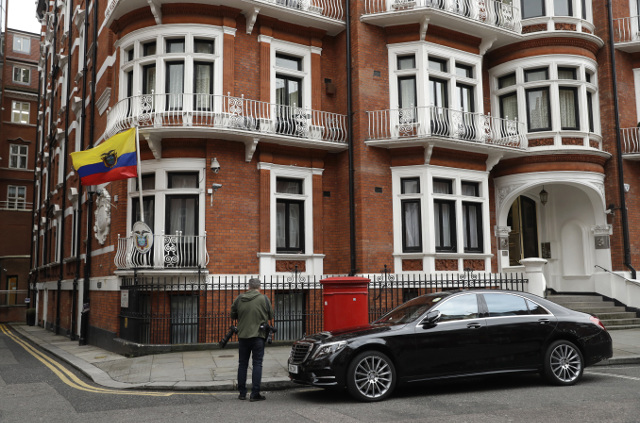 Assange has been in Ecuador's embassy in London since 2012. Photo: Matt Dunham/AP

In a statement on its website, the Swedish prosecution authority said that the “Director of Public Prosecution, Ms Marianne Ny, has today decided to discontinue the investigation regarding suspected rape (lesser degree) by Julian Assange”.

“With the consideration that all options of moving the investigation forward are now exhausted it appears that – in light of the views expressed by the Supreme Court (Högsta domstolen) on the proportionality of remanding someone in absentia – it is no longer proportional to maintain the decision to remand Julian Assange in his absence and maintain the European arrest warrant,” Ny wrote in her notification to Stockholm District Court.

“I have therefore today lifted the decision to remand Julian Assange in his absence,” she added.

In a press conference later in the day, Ny elaborated that it was not possible to formally serve Assange with notice of the suspicions against him, a prerequisite under Swedish law if the investigation was to progress further:

“Ecuador granted legal assistance and made it clear that all measures would be performed with full voluntary participation of Mr. Assange (…) Formal issues are important in a legal system in terms of legal certainty, it is important to be able to serve the suspect with suspicions. The decision to discontinue the investigation is not because we've been able to make a full assessment of the evidence, but because we didn't see possibilities to advance the investigation. So we won't make any statements on the issue of guilt”.

Pressed over whether Ecuador is to blame for the inability to serve the notice and breakdown of the investigation, she added:

“I don't want to assign blame and responsibility to any particular person for this. I must note however that the reason for this is that Julian Assange has kept himself away from us for so long”.

“It's not about money but redress,” Samuelsson told news agency TT.

He added that he believed Assange would eventually try to move to Ecuador.

Detained for 7 years without charge by while my children grew up and my name was slandered. I do not forgive or forget.

The WikiLeaks founder's lawyer filed a request at Stockholm District Court earlier in May asking for an end to the arrest warrant against his client, arguing it should be dropped now that the US has expressed a desire to charge the 45-year-old.

Assange had been remanded in custody by Sweden 'in absentia' over a 2010 rape allegation, and has been taking refuge inside Ecuador's embassy in London since 2012 in order to escape the warrant, citing fears he may be extradited to the US to be tried over WikiLeaks' publication of thousands of classified documents.

One of Assange's lawyers, Melinda Taylor, indicated earlier on Friday that the preliminary investigation into him being closed or the lifting of the European arrest warrant would not necessarily mean the Australian would make a hasty exit for Ecuador.

“The first thing one likely needs to do is seek guarantees from the British authorities that he won’t be seized in some other way,” she told news agency TT.

Both British and American authorities have “consistently refused to confirm or deny” if there is a request for extradition to the US, she said. Assange is also accused of breaching his bail conditions in the UK for fleeing to Ecuador's embassy, she noted.

And in a statement released on Friday afternoon, the Metropolitan Police confirmed it is obliged to arrest Assange should he leave the embassy.

“Westminster Magistrates' Court issued a warrant for the arrest of Julian Assange following him failing to surrender to the court on the 29 June 2012. The Metropolitan Police Service is obliged to execute that warrant should he leave the Embassy,” the statement reads.

“Whilst Mr Assange was wanted on a European Arrest Warrant (EAW) for an extremely serious offence, the MPS response reflected the serious nature of that crime. Now that the situation has changed and the Swedish authorities have discontinued their investigation into that matter, Mr Assange remains wanted for a much less serious offence. The MPS will provide a level of resourcing which is proportionate to that offence,” it continues.

When the Swedish announcement was made on Friday, WikiLeaks commented through its Twitter account that the “focus now moves to the UK”.

UK refuses to confirm or deny whether it has already received a US extradition warrant for Julian Assange. Focus now moves to UK.

And Assange's Swedish lawyer hailed the news as a “victory” for his client.

“It is a complete victory for Assange. He is free to leave the embassy when he wants. We have won the Assange case. He is of course happy and relieved. But he is critical over this going on for so long,” Per E Samuelson told Sveriges Radio.

After refusing to travel to Sweden for questioning, Assange was grilled last December by an Ecuadorian prosecutor on questions provided by Swedish officials, with Swedish prosecutor Ingrid Isgren present.

He has always maintained that he is innocent of the rape accusation from 2010, when he was accused of having sex with a woman as she slept without using a condom, despite her repeatedly denying him unprotected sex.