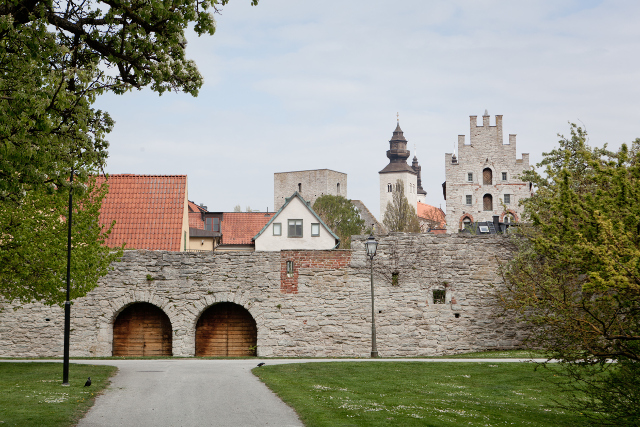 Walking around medieval town Visby is like going back in history. Filled with one ancient house to another, Visby is arguably the best preserved city in all of Scandinavia. It really doesn't matter which direction you choose: wild roses grow all along picturesque cobblestone roads and beautiful Swedish fences.

It took 38 years in the 13th century to build the first part of Visby's city wall, designed to protect the city from intruders. Although made of softer limestone, it still stands around the whole medieval part of the city, which is exceptional for Europe. Strolling along the wall takes you an hour or two: its total length is 3.6 km.

All around Gotland you will find several medieval church ruins, at least twelve of them in the main town of Visby. Sunbeams find their way through broken stone arches and little trees grow where an altar was situated in days gone by. The ruins also provide perfect surroundings for the yearly “Medeltidsveckan” (Medieval Week) festival.

Mulberry and walnut trees normally prefer warmer climates, but at the Botanical Gardens of Visby they seem pretty comfortable – according to their growth anyway. Next to beautiful plants, visitors can always find a calm place to have a break, such as the one in this Insta shot.

The only medieval church in Visby which is still in use was first build as church for German merchants in town. Its architecture is still breathtakin – as you can see in this shot.

Ever wondered where to find the “real” Villa Villekulla? Here it is: The resort of Kneippbyn south of Visby is a famous destination for families and hosts the model of the home built for various TV and film adaptations of Astrid Lindgren's classic. Every day during high season you'll find Pippi, Tommy and Annika singing and performing.

Throwback from our exiting trip to Gotland ?? some years ago, visiting #pippilottaviktualiarollgardinapfefferminzefraimstochterlangstrumpf and her original home from the movies ?and Tv ?series?#villevillekulla #pippi #gotland #kneipbyn #sweden #visitgotland #visby #lillegubben

Fårö –  The home of Ingmar Bergman

Fans of Swedish film icon Ingmar Bergman and films like “Through a Glass Darkly” (1960) or “Shame” (1968) will know all about the stunning landscape of Fårö, a northern island which belongs to Gotland. Shaped by spectacular rock formations, the environment seems to be both, rough and mystic.

What looks like a Caribbean island in the image below is actually a former limestone quarry, now filled up with clear blue water. The “Blue Lagoon” (Blå Lagunen) in the northern part of Gotland is a popular bathing place in summer and perfect for ambitious swimming, as the water becomes deep quickly.

Whilst discovering ruins in the cities you will likely stumble upon Gotland's scenic fishing villages. Left behind small boats have become more and more of a part of the natural environment, creating a lively special atmosphere of traditional coastal fishery in former times.

If you are in love with old cars and Rock and Roll, you have to call in on Kutens Bensin (Kuten's Patrol) on Fårö. And don't forget your camera – the old cars in scenic surroundings, the little cafe and owner Thomas “Kuten” Lindholm make great photo subjects.