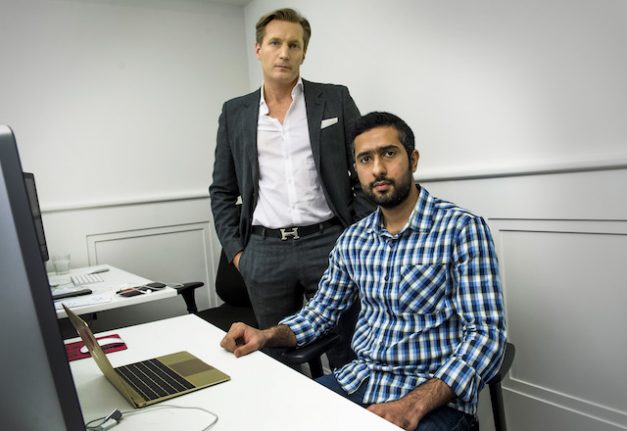 Tayyab Shabab with Mathias Plank, CEO at Dynamo. Photo: Claudio Bresciani/TT
Sought-after programmer Tayyab Shabab lost his case in the Stockholm Migration Court earlier this month, and was told he had four weeks to leave the country.
But the Pakistani star developer has now decided to take his case to the Migration Court of Appeal (Migrationsöverdomstolen), reports Dagens Industri.
“I think it's wrong that I'm being punished for something I didn't do,” Shabab told Dagens Industri.
Shabab is described as a “world class talent” and has a steady job as an app developer with Dynamo in Sweden, but last year he had an application for a work permit extension rejected by the Swedish Migration Agency (Migrationsverket) because a previous employer forgot to take out occupational pension insurance for him.
The fight to prevent his deportation was backed by huge names in the tech world including Spotify founder Daniel Ek, and also provoked an online petition signed by more than 10,000 people.
READ ALSO: Spotify slams 'ridiculous' deportation threat faced by staff in Sweden
With the help of non-profit organization Centre for Justice, Shabab launched an appeal against Migrationsverket's decision, but lost.
Shabab's lawyer at Centre for Justice, Fredrik Bergman, said he believed the Migration Court of Appeal would try the case.
“European Union law already states that small mistakes should not lead to deportation. That must be considered applicable,” Bergman told Dagens Industri.
READ ALSO: Sweden to fix rules that lead to deportations over admin slips