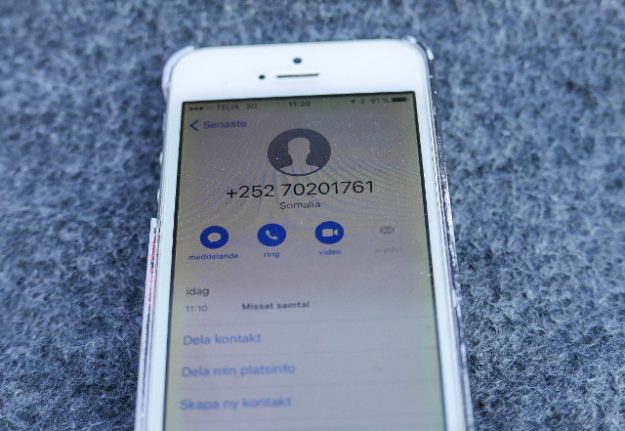 A host of suspicious calls from numbers starting with the country code +252 were reported to the police between May 26th and 27th, and they suspect it is an attempt at fraud.

Swedes who were targeted say that they received missed calls during the middle of the night, and when they called back they were connected to answering machines and hold music, apparently designed to keep them on a premium rate line for as long as possible.

Telephone operators like Telia have recommended that their customers avoid responding to missed calls from unknown foreign numbers for the time being. While answering a call from abroad does not cost extra, outgoing calls to the numbers do.

The makers of Swedish caller ID app Truecaller saw customer reports about the number surge over a short period of time in recent days, flagging it up as a scam.

“We instantly saw spam reports from +252 skyrocket within hours, and this caused us to send a notification to our Swedish users to be cautious about calling back,” Lindsey LaMont from Truecaller told The Local.

They have now received over 10,000 spam reports about the number and have urged scepticism if called unexpectedly from abroad:

“Obvious warning signs would be calls or SMS messages from country codes that are not normal in your circle of friends or family. If you are not expecting a call from somewhere, it is good to question the call”.

According to the makers of the app Sweden is not unique in being targeted by this kind of scam, a consequence of many people ditching landlines in favour of mobiles as their main telephone.

“These kind of scams are becoming more and more common as most people are going ‘mobile first’ and getting rid of their landlines. In the US there was the 'One Ring Scam' that is exactly the same as what we are seeing in Sweden right now. These scams are an easy way to cheat people because it plays with your curiosity but also on the fear of missing out on something important,” LaMont explained.