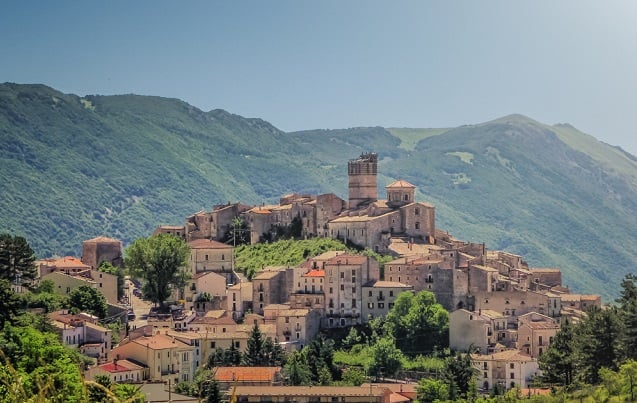 File photo of one of the towns in the Gran Sasso National Park. Photo: pandionhiatus3/Depositphotos

The Alfredo Quaranta school is located in the small Abruzzo town of Crognaleto in the Gran Sasso National Park. The area was among those badly hit by earthquakes between August 2016 and January 2017, when severe weather conditions compounded recovery efforts.

The new school is environmentally sustainable, with wooden structures aimed to blend into the natural surroundings, and should be “totally resistant” to future quakes, Ikea's Italian boss said.

It was officially opened in a ceremony on Monday attended by senior Italian politicians and representatives from regional authorities, Ikea, and the Swedish Embassy.

Local children cut the ceremonial ribbon, after which they released yellow and blue balloons – the colours of the Swedish flag.

Giuseppe D'Alonzo, mayor of Crognaleto, said the school was “a confidence boost to a region which has suffered so much”.

“I'm very happy about what has been achieved in a very short time: just 45 days to create a safe and avant-garde school,” D'Alonzo added.

More than 60 local students aged between six and 16 will be taught in the school, which cost €500,000 and is furnished in a typical Swedish style, with plenty of bright colours in the interior.

Part of the funding for the project came thanks to around 7,000 of Ikea's Italian workers, who asked the company to use money earmarked for staff Christmas gifts to help earthquake victims instead.

Crognaleto is a small town home to around 1,300 people, but 60 percent of its total area was left damaged after the earthquakes and extreme weather conditions earlier this year. The town's two existing schools were both left unusable following the quakes in August 2016 and January and authorities have said they plan to demolish both structures.

Many schools across the entire affected region were badly damaged by the quakes, prompting concern over the stability of the buildings – particularly since some of the collapsed schools had supposedly been upgraded to modern anti-quake norms.

Italy's National Anti-Corruption Agency (ANAC) has opened a probe into some of the building collapses in the 2016 earthquakes, to assess how contracts for the building work were awarded.

President Sergio Mattarella said in September that the government would allocate funds to deal with safety in schools, admitting that Italy's schools had “certain weaknesses and problems to overcome”.

His comments came in a week that saw two roof collapses in Lombardy schools, both incidents unrelated to earthquake damage.

READ MORE: How Italy plans to rebuild its earthquake-damaged towns