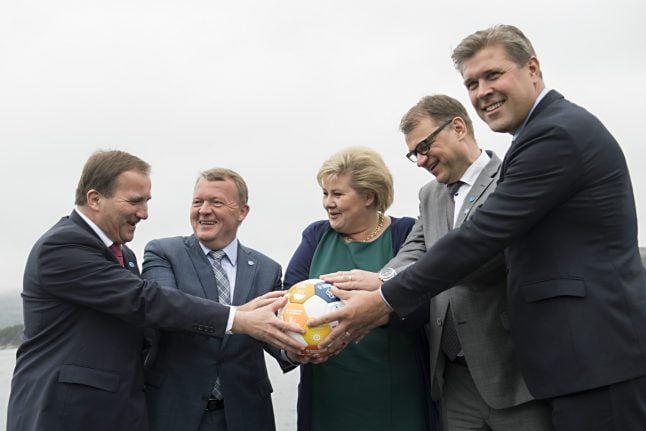 The picture is uncannily similar to a photo of Trump with Saudi King Salman bin Abdulaziz and Egyptian president Abdel Fatteh Al-Sisi taken during the former’s recent foreign trip.

In the Trump photo, the three leaders are shown holding a glowing globe in a darkened room filled with people.

So what exactly was that glowing white orb that President Trump was touching this weekend? https://t.co/oKJI6rWHsm pic.twitter.com/KHueK9BKwp

That photo went viral, with comparisons made on social media to various scenes from science fiction and animated films.

I PHOTOSHOPPED SARUMAN INTO TRUMP'S ORB PICTURE AND IT'S NOT EVEN WEIRD pic.twitter.com/cVJFGP5NPG

Now it seems as if the Nordic leaders have joined in the fun.

“When the Nordic prime ministers are openly mocking President Trump and the Saudis,” wrote Norwegian journalist Steffen Stø as he posted the Nordic photo on Twitter.

When the Nordic prime ministers are openly mocking #PresidentTrump and the #Saudis .. pic.twitter.com/6G1iOlf2qK

The office of Swedish PM Löfven denied that Monday’s photo opportunity was an opportunity for a PR jab at Trump.

“There are symbols on the football that symbolise the UN’s sustainability goals and the prime minister initiative that the Nordic Council of Ministers is working with… This is not a hint at President Trump. It is nothing to do with that,” Löfven’s press secretary Ingela Nilsson told the Aftonbladet newspaper.

But Norwegian PM Solberg posted the two images one above the other on her own Facebook and Twitter pages, while tagging her Nordic opposite numbers in the posts.

“Who rules the world? Riyadh vs. Bergen. Don’t know what they were thinking on the top photo. On the bottom photo are five Nordic prime ministers holding a ball with sustainability goals. We hope they will guide the way to the future,” she wrote.

Solberg’s press secretary Sigbjørn Aanes told Norwegian media TV2 that the photo was planned prior to Trump being pictured with a glowing globe in Riyadh.

“This was planned long before the Trump picture and we had this ball, which will also be used in the Norway Cup, with us at the meeting with the other leaders and used it for promotional purposes,” he said.

It is not the first time Scandinavian politicians have appeared to mock the US president through photo opportunities.

In February, Swedish Deputy Prime Minister and Climate Minister Isabella Lövin appeared to take a swipe at US President Donald Trump by posting an image of her and female colleagues signing a proposal for Sweden's new climate law, parodying the viral image of Trump signing off on an anti-abortion executive order while surrounded by men.