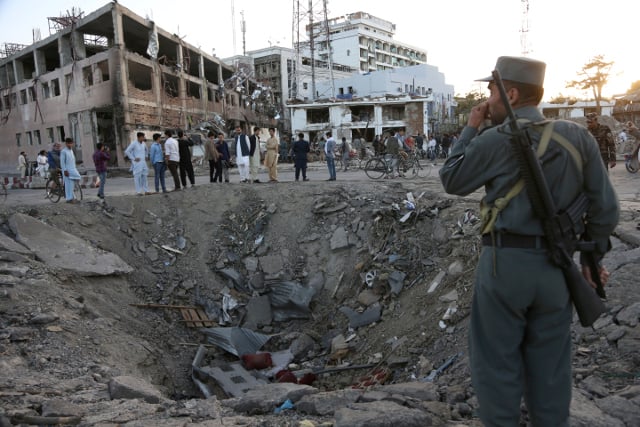 Where the explosion happened in Kabul. Photo: AP Photos/Rahmat Gul

Germany said on Wednesday it had postponed a scheduled deportation flight of rejected Afghan asylum seekers after a Kabul truck bomb attack killed 80 and wounded hundreds. The bombing killed an Afghan guard at the German embassy and wounded two embassy staff, one of them German, the other one Afghan.

“In the next few days, there will be no return trips to Afghanistan,” said an interior ministry spokesman, insisting however that deportations would continue after that.

The bomb attack stirred further debate in Sweden a day after campaigners gathered outside a Migration Agency centre in southern Sweden to protest the deportation of around 20 Afghans, who were escorted by police to a chartered aircraft leaving for Kabul on Tuesday evening, newspaper DN reported.

While Sweden generally does not deport people to war-torn Syria, it makes a decision on each Afghan application on an individual basis. In December the Migration Agency noted that the security situation had deteriorated in the country, but insisted that some provinces were safer than others.

In 2015 23,000 unaccompanied minors from Afghanistan applied for asylum in Sweden.

“Of course it is our view that deportations to Kabul should be stopped,” Sanna Vestin, chairwoman of the Swedish Network of Refugee Support Groups, FARR, told The Local on Wednesday.

'Vi Står Inte Ut', a campaign group for the rights of refugee children, urged Sweden's foreign ministry and the Migration Agency to carry out a new evaluation of the security situation. “We also urge Sweden's Social Democratic prime minister Stefan Löfven to support us in our fight for humanity and work to get Sweden to immediately stop forcibly deporting unaccompanied children and young people,” it wrote in a statement.

“The government is of course concerned about recent security developments in Afghanistan,” interior ministry spokesperson Sofie Rudh told The Local.

Asked if any discussions had been held at government level about following Germany's lead in temporarily suspending deportations, she said: “The Swedish authorities responsible are the ones who determine this, through individual assessments in each case. The government may not interfere in that assessment.”

In a statement e-mailed to The Local and other media, Fredrik Beijer, head of the Migration Agency's legal department, said the agency was monitoring the situation in Afghanistan, but did not confirm any imminent policy changes.

“The situation in Afghanistan is serious and has deteriorated in the past year. The security situation however varies between and within different provinces. We note that there is an internal armed conflict in Kabul among other places, with repeated serious attacks. Many asylum seekers from Afghanistan may therefore stay in Sweden, but the situation is not such that everyone is entitled to protection. Each case is assessed on an individual basis. The Migration Agency continues to closely monitor the development in Afghanistan and makes decisions based on what is happening in the country.”

“There are reports that Germany authorities have cancelled a plane to Afghanistan following this morning's attack in Kabul. Of course, such an attack could mean that Swedish authorities also temporarily stop a return trip, linked to the fact that it would be practically difficult in such a situation,” he said.

Last year the Migration Agency processed 12,168 Afghan asylum applications, 4,152 of which were rejected in the first instance.