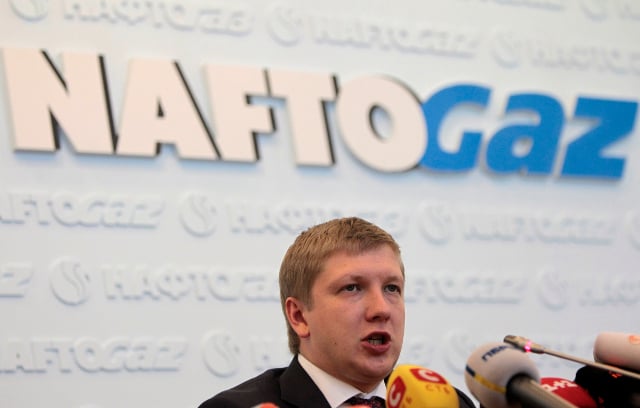 Naftogaz and Russia's natural gas giant Gazprom are waging a furious legal battle in Sweden that coincides with the Kremlin-backed military campaign fought by Ukraine's insurgents in the former Soviet republic's separatist east.

Ukraine signed a ten-year gas purchase contract after being cut off from Russian deliveries in a 2009 pricing feud that came in the middle of the winter heating season and while Kiev was looking for closer Western ties.

Former Ukrainian prime minister Yulia Tymoshenko was tried for negotiating what her critics called unfavourable terms of the agreement and convicted during the rule of Russian-backed president Viktor Yanukovych in October 2011.

She was released from prison days after Yanukovych was ousted and forced into self-imposed exile in Russia by a wave of pro-EU protests in February 2014.

The counter-claims were issued once Ukraine freed itself out from under Russia's thumb.

The final verdict could have dire consequences for either Naftogaz or Gazprom.

The Ukrainian company is seeking to win back $18 billion that it argues it overpaid to Gazprom in 2011-2015 after being charged “non-market” prices.

Gazprom dismisses the Naftogaz claim and demands $37.1 billion to compensate for the volumes of gas Naftogaz allegedly failed to buy under the terms of the disputed “take-or-pay” provision.

The take-or-pay contracts preferred by Gazprom require a client to purchase a set amount of gas and pay for the volumes it does not buy.

But the Ukrainian company said in a statement that “the Stockholm arbitration court has fully satisfied Naftogaz's demands concerning the take-or-pay principle”.

“We did it,” Naftogaz chief executive Andriy Kobolev wrote on his Facebook page.

Naftogaz added that the Swedish arbitration panel also sided with its right to resell the gas it imported from Gazprom.

The Russian giant had argued that Ukraine's profits from those exports were not set in the terms of the contract and therefore illegal.

The third ruling said the Naftogaz “is entitled to a market-reflective adjustment of the price formula”, the Ukrainian company said.

A Gazprom spokeswoman told Russian news agencies that the firm was still analyzing the details of the 790-page findings by the Stockholm panel.

The Stockholm arbitration court has left a decision on the settlement figure for a later date.

It must also still rule on a separate case concerning the amount Gazprom must pay Naftogaz for the gas it exports through Ukraine to the rest of Europe.

EU states receive roughly 15 percent of their Russian gas through Ukrainian pipelines and Naftogaz gets a cut that depends on the annual volumes shipped.

The sides have argued for years over how much Naftogaz can charge Gazprom for such transfers.

Gazprom counters that the Kiev-based firm owes it $7 million for illegally set charges.