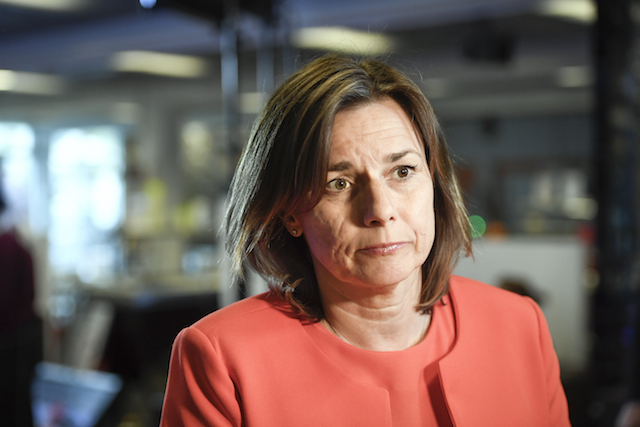 Green Party spokesperson and Deputy Prime Minister Isabella Lövin. Photo: Maja Suslin/TT
Green Party Deputy Prime Minister Isabella Lövin said in an interview with Dagens Nyheter on Thursday she was not surprised by the US president's decision.
“It was not exactly an unexpected announcement, yet it is deeply regrettable. Politically, this is a very negative signal for global cooperation. This is a treaty that was accepted across the world,” Lövin told Dagens Nyheter.
Lövin, who is also Sweden's Climate Minister, made headlines around the world earlier this year when she appeared to be trolling Donald Trump with a picture of her signing the proposal for Sweden's new climate law. The image showed her surrounded by female colleagues, parodying a viral image of the US president signing off on an anti-abortion while surrounded by men.
READ ALSO: Sweden presents new climate law and zero emissions goal
In France, President Emmanuel Macron said on Thursday that Donald Trump had made an historic error by abandoning the Paris climate agreement. He also rebuked the US president's idea of redrawing the 2015 accord, reaffirming in a TV address that the Paris agreement “remains irreversible”, a statement backed by Lövin.
“I agree. You cannot tear up the Paris agreement. It is the result of so many years of negotiation,” she told Dagens Nyheter.
Asked by the paper for her reaction to Trump saying, shortly after announcing the climate agreement withdrawal, that the USA will become the 'cleanest and most environmentally-friendly country on Earth,' Lövin responded:
“Well, it would be interesting to know what scientific research he's leaning against, really?”
READ ALSO: Swedes like Trump less than any other world leader