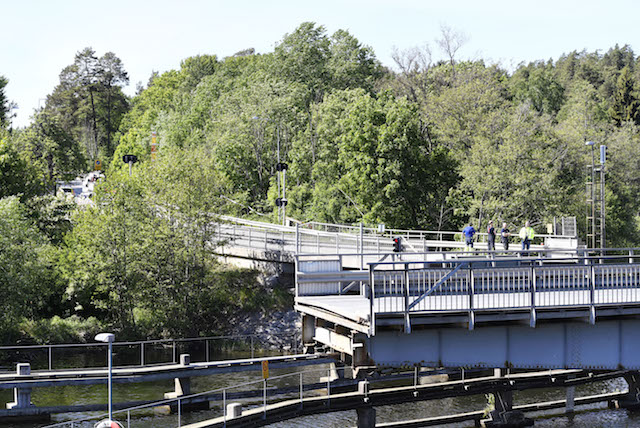 The Gamla Stäket swing bridge was open at the time of the accident. Photo: Maja Suslin/TT
The accident took place at 1.30pm on Saturday on the Gamla Stäket bridge, north-west of Stockholm.
The car and caravan passed through the safety barriers onto the bridge, which was opened at the time to allow boats to pass through the Stäket inlet of Lake Mälaren.
“We have picked up two people from the water,” Ulf Blomqvist, head of the rescue operations, told the TT newswire.
The car sank into the water, while the caravan was still floating, reports Aftonbladet.
Two witnesses of the accident reportedly jumped off the bridge at an early stage to try and rescue the people in the car, according to Aftonbladet.
On Wednesday broadcaster SVT reported that one of the people, a man in his 80s, had died in hospital. The other, a man in his 30s, remains in intensive care.
READ ALSO: Spectacular Viking manor discovered near Birka
Url copied to clipboard!