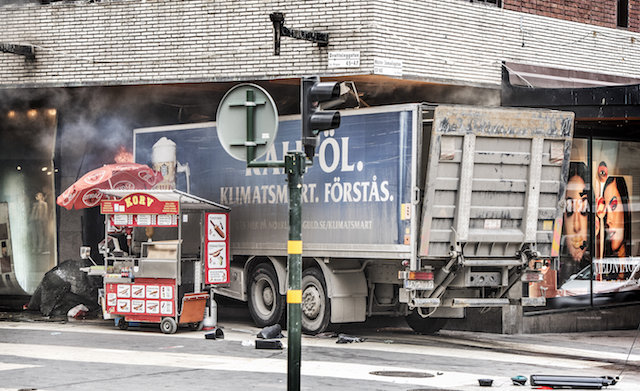 The truck that was driven down Drottninggatan in central Stockholm later crashed into the Åhléns department store. Photo: Tomas Oneborg/SvD/TT
The cross-party talks were launched shortly after the truck attack in central Stockholm on April 7th, which killed five people and injured several others.
“We are intensifying the preventive work against terrorism, we are strengthening the Security Service's and the police's opportunities to get access to signals intelligence and the opportunities for CCTV monitoring, and we are strengthening our capacity to handle terror threats,” Home Affairs Minister Anders Ygeman said. Annika Hirvonen Falk (Green Party), Home Affairs Minister Anders Ygeman (Social Democrats), Beatrice Ask (Moderate Party), Johan Hedin (Centre Party), Roger Haddad (Liberals) and Andreas Carlson (Christian Democrats) presenting the cross-party agreement against terrorism on Wednesday. Photo: Anders Wiklund/TT
READ ALSO: Isis uses Nutella jars and cat GIFs to lure Westerners: study
The agreement presented on Wednesday is several pages long and contains several points, most of which were already on the table when the talks between the centre-left government and the four centre-right opposition Alliance parties. The Left Party and the Sweden Democrats had not been invited to the talks.
Some of the points presented:
The six parties also agreed that an inquiry should be launched into the course of events during the attack in Stockholm on April 7th, and to draw conclusions on what should be learned from the attack for the future.
READ ALSO: Paris hammer attack suspect worked as a journalist in Sweden: report