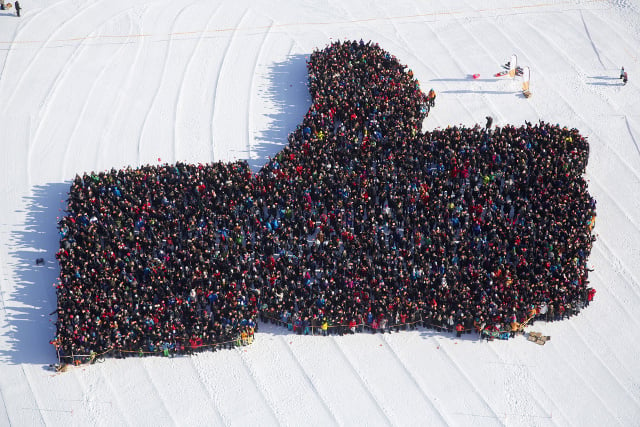 Let’s face it. Not many people outside of Sweden have heard of Luleå.
So how did one of the world’s hottest technology companies decide to call this icy outpost home?
It all started in 2008, when Business Sweden together with several regional development agencies began looking for ways to boost the regional economy by leveraging existing resources to entice new businesses to establish operations in Sweden.

Within a year, meetings were arranged in the United States that included representatives from Business Sweden, other Swedish regional development agencies, and prospective companies. Facebook was among them.

“We met 14 companies and we couldn’t dream one of them, Facebook, would be interested,” Matz Engman, who at the time was CEO of Luleå Näringsliv, one of the regional development agencies involved, once said about the process.

But it turns out little Luleå had “everything Facebook needed”, Engman said, and in 2010 Facebook came for a visit.

And finally, in February 2011, Karl Petersen, Luleå’s mayor at the time, received the phone call he’d been waiting for.

“Hello Mr. Mayor, this is Facebook,” said the voice on the other end of the line. “You are the mayor and have to know first – we are coming to Luleå.”

Luleå’s Facebook server hall was the first Facebook datacenter outside of the US, and started serving traffic in 2013. It was ground-breaking – and spot on.

“We really like it here. The Luleå region offers many key components that are good conditions for data centers,” Facebook Site Manager Joel Kjellgren explains. “Good climate conditions, a reliable power supply, and great support from the local community are factors that influenced the choice, and Luleå is a very nice place for us to live.”

So well, in fact, that the social media giant decided to build another massive server hall a stone’s throw from the first.

“Every day is a new day and at Facebook things move fast. In 2014 we started the construction of our second building in Luleå,” Kjellgren says. “Like our first building there in Luleå, the second one is among the most advanced and energy efficient facilities of its kind.”

OCP is the industry-wide coalition of technology companies that is creating cost and energy efficient designs, sharing them for free under an open source model.

“When developing data centers we continuously refine our designs and construction processes to maximise efficiency, reduce material use, and speed up build time,” Kjellgren explains.

The design fits in perfectly with the Swedish model too, balancing and optimising a number of factors including operating efficiency, and minimising environmental impact.

Luleå’s subarctic climate is of course a key factor for Facebook’s operations.

Even in the warm season, the average daily temperature is just 15°C, making it ideal for cooling high-power data centers.

“We can cool the data center just with outside air,” Kjellgren confirms. “There is also reliable power from a hydroelectric source. Even though our data centers are the most energy efficient in the world, we still need power to run them.”

“We appreciate being able to power our facility with 100 percent renewable energy, and we are really happy with the way our data centers in Luleå contribute to our mission of making the world more open and connected.”

But it’s not just the climate that lured Facebook way up north. Kjellgren adds that the community is just as important.

“We’re happy to be a part of the Luleå community,” he says. “We enjoy having access to a strong pool of competence for construction and operations staff, and we cooperate with a great set of community partners.”

The Luleå University of Technology is one of Facebook’s valued neighbours in the area, with a rich history of innovation and excellent communications technology. Proximity to the university and its more than 17,000 students was one of Facebook’s own reasons for choosing the area.

'Something all of Europe was pining for'

Indeed, the entire region is strong in the tech field, and has only grown stronger since Facebook moved in.

“It was a huge event in Luleå’s history,” Karl Petersen said after Facebook’s choice was revealed. “It was a unique establishment that all of Europe was pining for.”

Support on regional and national levels also played a role, and Kjellgren adds that Sweden on the whole has been “tremendously welcoming and helpful”.

“The data center industry is growing and more companies are looking for favourable locations. Sweden has been successful in identifying and understanding the comparative advantages, in terms of climate, IT competence, etc. It’s the optimal location for this new type of base industry.”

Applications to Luleå University of Technology have risen significantly, and Petersen added that the city's local science park experienced a 25 percent rise in companies coming to the area after Facebook’s first server was built there.

But the 47,000 residents of Luleå will always remember: Facebook got there first. “We’re very happy to see that Facebook’s arrival has been able to trigger the growth and development of the region,” Kjellgren says.

Facebook is constantly growing and Kjellgren says the company is committed to continuously developing technologies and infrastructure to ensure the best possible experience to all of the millions of people around the world who use the service every day.

The company’s mission is to give people the power to share and make the world more open and connected – and Sweden is the perfect match.

“Representatives for Luleå and Sweden have proved to be very supportive partners along the way, showing true commitment to the cause.”

This article was produced by The Local Client Studio and sponsored by Data Centers by Sweden. It was originally published in Advantage Sweden.