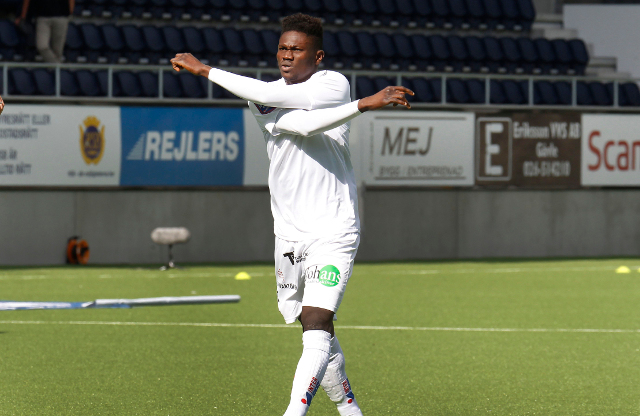 Kwame Bonsu, who has now been dismissed from Gefle IF. Photo: Pernilla Wahlman/TT

A Swedish court on Friday sentenced a Ghanaian football player in Sweden's second division to two years in prison for raping and beating his then wife.

After serving his sentence, 22-year-old Kwame Bonsu, who played for the Gefle IF club, will be expelled from the Scandinavian country where he has lived since 2013, Gävle District Court said.

Gefle on Friday said Bonsu was dismissed from the team with immediate effect.

According to court documents seen by The Local he will also have to pay 122,600 kronor ($14,000) in compensation to his wife, who is a Swedish national.

He first met her in 2014 when he was playing in the southern Swedish city of Mjölby. They married the following year.

A few months after the wedding he signed a transfer to the town of Gävle, located about 300 kilometres away from Mjölby.

Bonsu's wife had wanted him to stay to continue his studies.

The victim said the rape and beatings took place in the couple's apartment during an evening in November 2015 when he had refused to let her out.

Bonsu repeatedly denied the charges, but testimony from his wife's relatives led the court to believe the victim's version of events.

His lawyer has appealed the sentence, reports Gefle Dagblad.