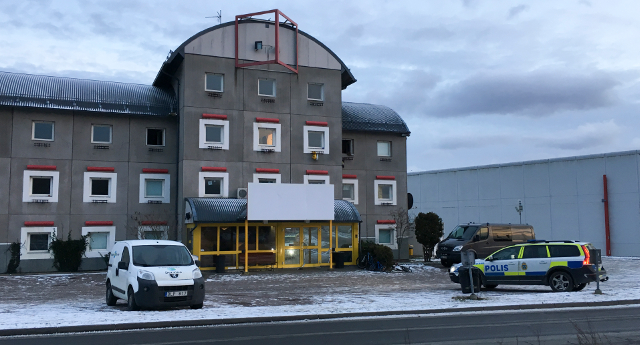 The refugee centre where a bomb exploded. Photo: Jonas Dagson/TT

The three men were charged on Friday in connection with a series of bomb incidents in the western city of Gothenburg last winter.

A blast at a refugee centre on January 5th left an immigration office staff member seriously injured with wounds to his legs. Two months earlier, on November 11th, a bomb went off outside the Syndikalistiskt Forum Kafe, a well-known far-left haunt. No one was injured in that blast.

One man is accused of having constructed all three bombs, another of providing the explosives and a third of placing the bomb on the campsite, Sweden's prosecutorial authority said on Friday.

“It is a matter of very serious crimes. We allege that the actions are politically motivated and that the targets are in line with such targets the Swedish white power movement has an interest in attacking,” prosecutor Mats Ljungqvist said in a statement.

All three men have been linked to the neo-Nazi Nordic Resistance Movement; however, the attacks are not believed to be directly connected to the organization.

“Rather, there are indications that they were dissatisfied with the leadership within the Nordic Resistance Movement for not wanting to use violence to the same extent as they wanted to,” said Ljungqvist.

“We can also see that two of the suspects shortly before the attacks received military training in Russia.”

“Generally it is a terror offence. They have done this systematically and with the purpose of instilling fear into the population. But I understand they have chosen a road which legally makes it easier to reach a conviction. I think it is unfortunate,” he told the TT newswire.

“We can't see that the actions have seriously destabilized political, constitutional, economic or social structures. Nor can attacks against refugee homes and refugees in general be considered to seriously instill fear in a population,” said Ljungqvist, however.