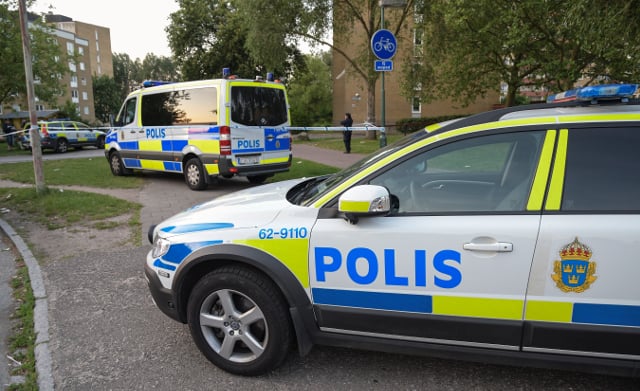 Police after a shooting in Malmö's Rosengård district in May last year. Photo: Johan Nilsson/TT

The report, which is likely to grab headlines in Sweden and abroad, follows another high-profile report from 2015 which listed 53 so-called vulnerable areas, including 15 considered especially vulnerable.

Some of these were revealed last week, but the full version was presented today.

The term “no-go zone” famously caught on in some international media back in 2015 after it was used by a Swedish newspaper columnist to label these areas, but it has been strongly rejected by police and emergency services themselves.

The police definition describe these districts as socio-economically vulnerable areas with a generally high crime rate. In an especially vulnerable area there are also often parallel societal structures, religious extremism and police regularly have to adapt their methods to the volatile situation. Residents also often do not report crimes, either out of fear of retaliation or because they think it will not lead to anything.

READ ALSO: What is life really like in Stockholm's Rinkeby suburb?

In an opinion piece published by the Dagens Nyheter (DN) newspaper ahead of the presentation of the report on Wednesday, national police chiefs Dan Eliasson and Mats Löfving write that around 5,000 criminals and 200 criminal networks are believed to be based in these 61 vulnerable areas.

But the number of criminals risks increasing, they write. “Sweden needs national and long-term efforts to turn things around. We will now intensify our dialogue with relevant social actors and ensure that we together create action plans for all these 61 areas. The police cannot solve the situation in the vulnerable areas alone, but together with the joint efforts of society we can make a big difference.”

There are several reasons behind why the number of areas has gone up since the last report. In some areas, the situation has deteriorated, but the main reason is that the police have refined their data collection methods and have a better picture of the situation today, write Eliasson and Löfving.

In some areas, they add, the police have managed to improve the situation, by allocating extra officers to those areas and installing surveillance cameras to crack down on open drug and weapon trade.

“In one area it may have got worse, in another better, even though it's not visible in the statistics,” Eliasson said at a press conference on Wednesday.

He repeated that the police would not be able to solve the situation on their own.

“Other societal actors, help us, help us,” he said.

One of the areas that may be on the right path is Seved in Malmö, with a local police officer telling The Local earlier this month that it could potentially be removed from the list in a couple of years.

“The criminal network is still there, but they are becoming fewer and fewer and we are very happy that we're not seeing any new recruitment. There are no younger members connected to this network, so they are getting older and older and fewer and fewer,” the police's municipal liaison officer Jonatan Örstrand told The Local's Sweden in Focus series, adding that it “all depends on the course of the future”.