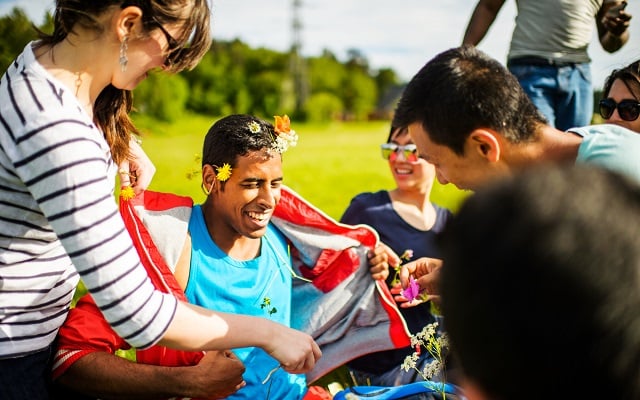 Get ready to pretend you're a frog. Photo: Simon Paulin/imagebank.sweden.se

With its pole dancing (no, not that kind), songs about frogs, pickled herring and copious amounts of snaps, Midsummer's Eve is one of Sweden's biggest, and certainly craziest, holidays.

It can be pretty weird for those of us who didn't grow up in the country, so we asked our readers to share their best, worst, weirdest and most embarrassing Midsummer memories. Here's what you came up with:

“My future father-in-law placed a flower in my then girlfriend's best friend's ample cleavage. Said friend spent the rest of the night clutching a pillow over said cleavage. In true Swedish fashion it was never spoken of again,” one The Local reader who wished to remain anonymous told us. Midsummer games are for all. Photo: Carolina Romare/imagebank.sweden.se

“My first Midsummer was two years ago. Even though the weather was awful, it didn't stop my in-laws and their friends from having a great time! We played some fun games, and it was the first time I had seen my in-laws tipsy. Funnily enough, my mother-in-law became more and more competitive at the games with every drink,” wrote Fareeza Nilsson on The Local Sweden's Facebook page.

“It was so nice to see family, neighbours, and friends enjoying and celebrating almost 23 hours of daylight, singing Swedish songs and dancing the night away. Can't wait to celebrate this year, again!” “I ate a watermelon that had been soaked in vodka without my knowledge. After only four beers I couldn't understand why I was off my face,” said Travis Geary, from Australia, about his first Midsummer. Midsummer's Eve is one of Sweden's most popular holidays. Photo: Carolina Romare/imagebank.sweden.se

“I had been in Sweden for about nine months after moving here to be with my girlfriend (now wife), who is the captain of the Swedish Women's National Hockey Team. Her family has a cabin in Kaggebo, so we went there to spend Midsummer with them,” reminisced American Anna Ramboldt.

“I decided it was the right time to propose to her so we took a walk down to the dock, which is located in the Baltic Sea. The proposal was a success and we were married a year later (the same day as the Swedish prince). Two years later, here we are happily married with our first child expected to be born in August! We plan on going to the cabin this Midsummer and create new memories!” “Last year, Brexit the night before followed by being stuck on a train for six hours. Had a great time. Still grumpy,” Briton Nicholas Bean tweeted.

Last year, brexit the night before followed by being stuck on a train for 6 hours. Had a great time. Still grumpy.

“We were on a break from filming so some of the camera and sound guys invited a few of us over to their place on Södermalm to celebrate (I think they felt bad we were all alone in the hotel for the holiday),” she said.

“We had a fantastic time celebrating in the courtyard of his apartment complex and as the night went on (and the snaps taken) I started chatting with his neighbours at the picnic table only 20 metres away. By the end of the night, one of the cute and young neighbours was flirting with me and asked me out. Only later did I learn that he was a high-level judge! Also my camera man friend later told me that night was the first time he had ever talked to those neighbours in the ten years he had lived there! It took some Americans and some alcohol to finally start a conversation! Certainly a Midsummer to remember!”