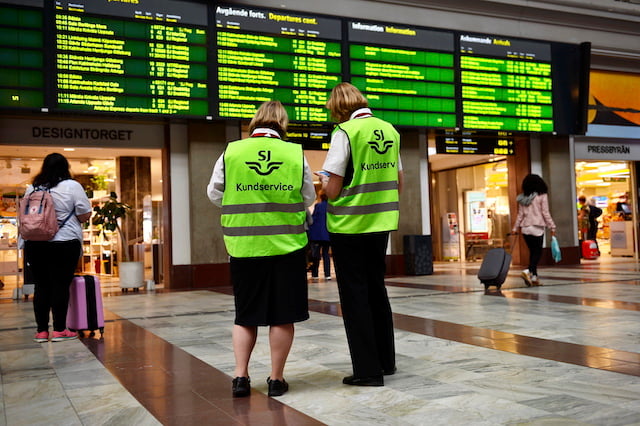 File photo: Izabelle Nordfjell/TT
Thousands of holidaymakers and commuters were caught up in travel chaos as a cable fire in Stockholm sparked train delays just a day before one of Sweden's biggest holidays.
Rail operator SJ was forced to cancel around 35-40 regional trains on Thursday, and said some cancellations and delays were to be expected on Friday (Midsummer's Eve).
Travellers were advised to check SJ's website or app for service updates.
Sweden's minister for infrastructure, Anna Johansson, said it was important to investigate what caused the incident, and what can be learnt from it.
“It is very unfortunate that this incident took place, and especially on one of the main travel days of the year. It means a lot of people are affected, and that is of course not good at all,” Johansson told TT newswire.
The Thursday before Midsummer's Eve is usually when people leave the city to head for their summer houses or back home to see their families for the hugely popular summer celebrations.
But a fire in a cable in a tunnel on Thursday saw rail traffic south of Stockholm's central station grind to a halt, sparking heavy delays and chaos for thousands. Trains between Malmö and Stockholm and Gothenburg and Stockholm were all affected, as were commuter trains in the capital region.
Police wrote that two people were injured in the fire which started before 11am in one of the tunnels of the new Citybanan railway track through Stockholm, which has not yet opened for traffic.