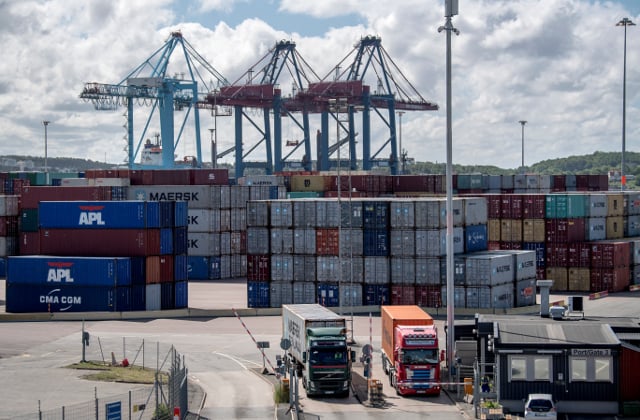 A large number of Maersk's 76 container terminals around the world were affected and were forced to run on manual systems on Wednesday, AP Moller Maersk chief operating officer Vincent Clerc told AFP.

Some were later back up and running, however Gothenburg harbour, Scandinavia's biggest port, was still affected on Thursday morning.

Work at Gothenburg harbour is already affected by a long-running conflict between the dockers' union and APM Terminals, owned by Maersk.

The row has resulted in strikes and layoffs, and blockades have prevented goods from reaching the terminal. With the computer system down it is not possible to collect those containers that do get there.

“There are already major delays because of the harbour conflict which has lasted for one and a half year. We have customers waiting and waiting. Then this comes, with the worst possible timing. Out of the frying pan and into the fire,” commented Steivik.

The series of cyber attacks began in Russia and Ukraine on Tuesday, hitting government and corporate computer systems across the world as the virus, called Petya, spread to western Europe and across the Atlantic.

Clerc said the cyber attack was “still ongoing” at Maersk on Wednesday at 1pm GMT, and that there had been a ransom demanded for the release of data but the Danish group had refused to pay.

“We have it contained … by proactively shutting down systems and computers to prevent it from further contaminating our systems.”

He said Maersk had not yet estimated the losses caused by the attack.

“A lot of it will depend on how quickly we can put in place our recovery plan… The longer we are affected the more the price tag will increase.”