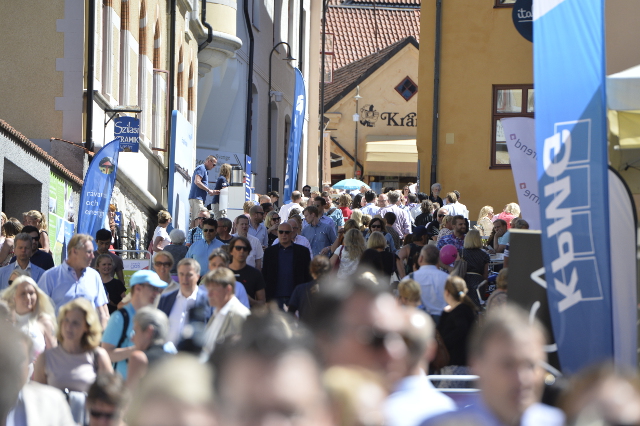 In the residual winter chill of early spring, when our host Owe Ronström pointed towards the far end of Adelsgatan and said there would be no place to stand two months from now, it seemed surreal. My first impression of Visby was of a small, picturesque town by the Baltic sea, with cobbled streets, 13th century ruins and tiny cottages; a town steeped in its medieval past. And very very quiet. A sharp contrast to Mumbai, my city of 21 million people.

Being a native of Visby and an ethnologist, the professor knew what he was talking about. And sure enough as the summer set in the complexion of the city began to change, all culminating towards the most talked-about event of the year, The Almedalen Week.

Right now the Almedalen Week is on in full swing and the streets are packed with people, some purposefully walking towards the next event on their calendar, others wandering and simply soaking in the atmosphere. Visby has transformed into a festive town with more than 40,000 visitors, that is nearly twice the number of people who stay here.

History has it that in the summer of 1968 former Prime Minister Olof Palme made a speech from the back of a truck next to the Almedalen Park. That speech, attended by a few hundred people, sowed the seeds for what was to become the biggest annual political event in the country. Now in its 49th year, Almedalen Week is an intrinsic part of Sweden's democracy, and there are locals who prefer to escape to their summer homes to avoid the 'mad rush'. But for an outsider it is a fascinating concept that has the potential to be replicated across democratic nations, including my own.

In a span of eight days, all political parties represented in the Swedish parliament will get to air their views in an open forum at Almedalen Park that hugs the inner wall of the harbour city. It is not necessary that the party in power will speak first. I am told dates are decided by lots, so that all parties get a fair chance. This year it was the Vänsterpartiet or the Left Party who got to present their point of view first.

Besides the official speeches that convey the agenda of each political party, the frantic activity around the periphery of Almedalen Park lends it a festive atmosphere. Television channels, radio stations and newspapers draw curious onlookers as they hold live debates and interviews in makeshift studios. Hotels, restaurants and even some homes open up their premises to host seminars, debates, talks, workshops and get-togethers all through the week. Out on the streets, young boys and girls eagerly hand you copies of newspapers, pamphlets, free drinking water and bright bags with their organization's logo.

Meanwhile the press room at Uppsala University's Gotland campus is abuzz with caffeine fuelled journalists, quietly typing in their copy for the next despatch or fixing interviews on their phone. Most journalists are from the local media, and seeing a foreign scribe does draw its share of curious looks.

At Almedalen Week, there seems to be space and a voice for everyone, even those with contrarian views. Environmentalists, food technologists, freedom of religion campaigners, youth leaders, social media analysts, women's groups, academia, corporate representatives, lobbyists, energy experts, urbanists, human rights defenders, and fringe organizations – all have their say somewhere in the 4,000 odd events that take place through the week. Who, for example, would imagine seeing practitioners of Falun Gong, a Chinese spiritual practice that is outlawed in China, at Almedalen? In such a scenario what to pick and what to drop can be overwhelming. But for regulars here there is a method to the seeming madness. Most people attending Almedalen Week know what they are here for. Schedules are tight. Each event starts on the dot and each speaker sticks to time, a very Swedish trait I am told. Perhaps that is why an eight-day event of this scale runs like clockwork.

For me, Almedalen Week has offered a fresh perspective on how diverse groups still coexist and debate under one arena even if they don't agree with each other's point of view. More so in this increasingly polarized world. Another interesting takeaway is the attention paid to wide-ranging and complex global issues. I had expected local matters to dominate. To my surprise, world affairs find an equal place at the table. Brexit, the conflict in Syria and the refugee crisis, climate change, sustainable food and fashion, artificial intelligence and the future of work, right to safe sex, role of academia in the age of alternative facts, feminism in Islam, journalism in a post-truth world; the issues under debate matter to the world at large.

By the looks of it Almedalen Week has gone beyond being a political week. It has organically expanded in scope by inviting debate on burning issues that affect our present and our future. Almedalen Week has everything going for it. And I am willing to wager that it could become a sought-after global platform to share new ideas, test new concepts and debate about the future of humankind. Give it another ten years.

Article written by Rupali Mehra, a senior journalist and news presenter from India. She has worked with several Indian and international news organizations including Reuters. Currently she lives in Visby with her husband, a researcher on 'Future Urbanisms' at Uppsala University, Campus Gotland. She can be reached at [email protected]