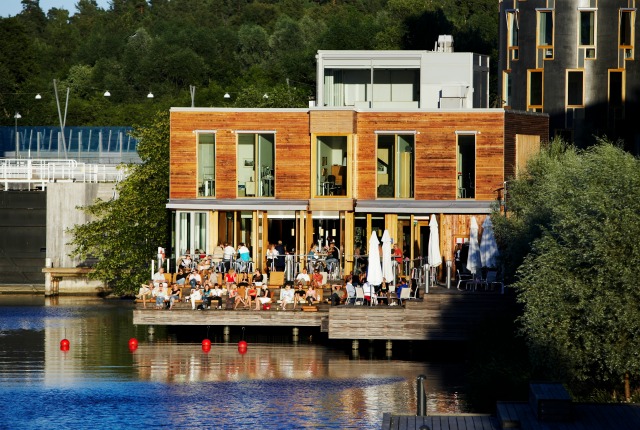 Enjoy a drink by the water at Hammarby Sjö. Photo: Mikael Sjoberg/mediabank.visitstockholm.com

Stockholm is blessed like few other cities when it comes to intertwining natural and urban spaces, as well as old and new.

Hip downtown restaurants one minute; secluded, tree-lined beaches the next. Centuries-old monuments across the street from dazzling modern architecture. Stockholm puts it all at your fingertips.

And discovering the city is also a breeze – the Arlanda Express train takes you from the airport to downtown Stockholm in only 20 minutes, quickly connecting you to an extensive public transit network that is a destination in and of itself, touted as the world’s longest art gallery.

It’s no wonder that tourism is booming – as more and more travellers discover the marvels of the capital of Scandinavia.

Most people already know about Stockholm’s main attractions like the Vasa Museum, City Hall, Old Town, and Skansen (just to name a few). But for anyone looking to dig a little deeper and broaden their Stockholm experience, here are some hidden gems outside the city centre you simply won’t want to miss.

Known as the gateway to Stockholm’s famed archipelago, this island is a mere 20 minute boat trip from the city. Be sure to snap a few iconic pics of Old Town from the water. Upon arrival, explore the many working artist’s studios, grab some seafood by the water at the Rökeriet restaurant, or simply find a spot on the rocks and grab some sun. It’s just that easy to make your archipelago dreams come true.

Långholmen is an island nestled on the northwest corner of Södermalm island, walking distance from the nearest metro. It’s perhaps most well-known as the sight of a former prison that’s been converted to a hostel. Out front is a pleasant beach where you can take a dip in the waters of Lake Mälaren. The island also has plenty of secluded walking paths that make it easy to forget you’re just minutes from the bustling city centre.

This lake connects Södermalm with a nearby urban district south of the city that features a wonderful mix of modern residential architecture and waterfront tranquillity. Wrapped by boardwalks, the small is the centrepiece of the eponymous Hammarby sjöstad which emerged from a major redevelopment project that transformed the once industrial area into one of the city’s trendiest neighbourhoods. Cosy cafes and scrumptious eateries abound (many with views of the water) – and don’t miss the Nya Carnegiebryggeriet, a craft brewery and restaurant perched on the harbour’s edge, just steps from where the ferry boat that can take you back across to Södermalm.

This wide swathe of green sits like a jewel perched on the northern edge of the city and is part of the Royal National City Park. It features vast lawns and meandering walking paths that take you from thick forests to the idyllic waterfront of Brunnsviken Lake. Speaking of royalty you might catch a glimpse of Crown Princess Victoria and her family, who make their home in Haga Palace. And if weather forces you indoors, take cover in the tropical Butterfly House (Fjärilshuset) on the park’s north end. There you can walk among swarms of exotic, free-flying butterflies – or check out one of the largest shark aquariums in Scandinavia.

Located on the southwestern edge of Södermalm island across the street from the Hornstull metro station, Tantolunden is another green area popular among Stockholm dwellers looking for a break from the bustling city. The sprawling park features a swimming area, plenty of picnic spots and playgrounds, as well as mini-golf and disc golf. You can even rent a kayak or stand-up paddleboard (SUP) and get a view of the park from the water. And don’t miss the array of charming 1920s-era cottages in the park’s allotment garden area. Combing modern art, cultural activities and stunning views of the archipelago, Artipelag lets you get your fix of natural and man-made beauty all in one place. It’s located among the majestic pines of Värmdö, overlooking the waters of Stockholm’s archipelago and is easily reachable by bus or boat. The brainchild of Björn Jakobson, the man behind the iconic ‘BabyBjörn’ baby carriers, the compound features two restaurants and nearly 3,000 square metres of exhibition space, making or a one-of-a-kind outing.

A mere 15-minute bus ride from Slussen lands you at Hellasgården, a recreation area on the western shore of Källtorp Lake in the middle of the tree-filled Nacka nature reserve. Enjoy a tranquil forest walk (or brisk jog), take a dip in the lake, and enjoy a sauna. You can even play a quick round at the 9-hole golf course or try your hand at fishing. Hellasgården also has a hostel so you can stay the night and enjoy the beauty of Swedish nature before breakfast.

With so much to do in Stockholm, why not make getting there as fast and easy as possible by booking your airport transfer with the Arlanda Express, the fastest route between Arlanda Airport and downtown (a mere 20 minutes).

This article was produced by The Local Client Studio and sponsored by Arlanda Express.