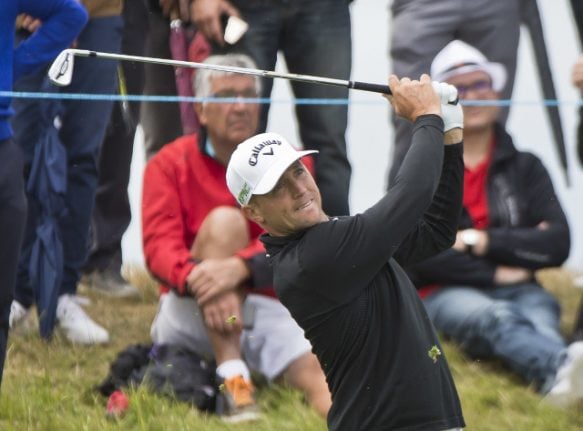 Alex Norén made a major impact on the golf world in 2016. Photo: Michel Euler/AP

Twelve months ago, Norén's two-shot victory at Castle Stuart in northern Scotland was the first of four European Tour victories in the second half of last year, a first for a Swedish-born golfer.

Norén, who turned 35 on Wednesday, tees up in the first round sitting in ninth place in the world rankings having captured a ninth Tour title in May courtesy of a sizzling final day and equal career low round of 62 that saw him win the BMW PGA Championship.

“I have many happy memories coming back here to Scotland and my win last year at Castle Stuart,” he said ahead of Thursday's first round.

“Of course, I had won before on the Tour but nothing as big as the Scottish Open and a tournament that I thought I could never win, so it was like a dream coming true.”

“This year has been a good year already but not near as good as my second half of the season last year.”

“But unlike last year at Castle Stuart, I have come back to the Scottish having won the BMW PGA so I am starting to win the bigger events on the Tour.”

READ ALSO: Could this golfer be the next Swedish sporting hero?

Also in the Scottish Open field is compatriot Henrik Stenson who next week goes to Royal Birkdale to defend his Open Championship title won 12 months ago at Troon, just down the road from Dundonald Links.

Stenson, currently ranked seventh in the world, missed the cut at the recent US Open but bounced back to form a week later in Munich, finishing 10th in the defence of his BMW International Open title.

“To be back here on a beautiful day, it's easy to remember last summer, of course, and what I managed to accomplish a little bit down the road there,” said Stenson.

“It has been a busy year, hectic year, and the Scottish Open is an important part of my preparation for The Open Championship, as you know.”

“I'm here to try and play a bit of links golf and hopefully pick up some momentum and some form.”

“My game feels like it's not far away but it needs that little bit of a push in the right direction, so hopefully this week we can take it up a notch or two.”