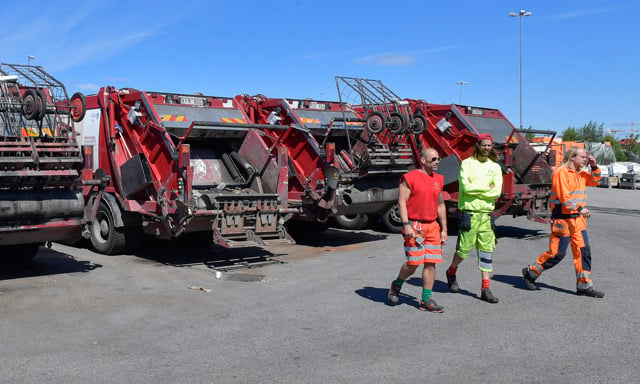 A Stockholm official said the "rubbish mountain" created by the strike was steadily dwindling. Photo: Jonas Ekströmer/TT
Although rubbish is not typically collected on the weekends, waste collection company Reno Norden had roughly 25 vehicles in operation working to clear out piles of trash that have resulted from a workers’ strike that began on July 5th.
The Swedish Labour Court on Friday ordered 29 waste collectors in Stockholm to return to work after they walked out last week in what the labour court ruled was to be considered unlawful strike action.
The striking waste collectors said they would defy the order, with one worker telling Swedish radio: “We know the strike is illegal, but we will not go back to work.”
A few of the striking workers returned to the job and Reno Norden recruited enough employees to send between 20 and 25 trucks out in Stockholm to work on resolving resident complaints.
An official with the city’s water and wastewater unit, Stockholm Vatten och Avfall, said that the rubbish situation was getting under control.
“There hasn’t been any giant chaos,” Katarina Johansson told news agency TT. “The mountain of rubbish has largely disappeared.”
Johansson said that nearly 80 rubbish complaints were filed on Sunday and that the city has responded by placing around 75 containers in strategic places throughout Stockholm.
The rubbish collectors’ discontent had been brewing for some time and erupted into a full-blown row when the company last week attempted to collect all keys to waste trucks and stations in Stockholm to create a digital key register.
According to waste collectors, the move makes it easier for their employers to fire them.
The Swedish Confederation of Transport Enterprises said last week that 31 workers at Reno Norden in Stockholm have called in sick and 46 people have quit their jobs. Most of the 29 people told to return to work are part of the latter group, reports Swedish newswire TT.
The Transport Enterprises argue the workers are obligated to carry out their contracted work duties for the duration of their one-month notice period.
Reno Norden is expected to be put a full fleet of 40 collection trucks on the streets by Monday. The vehicles will be manned by new employees.
Johansson said the situation should soon return to normal.