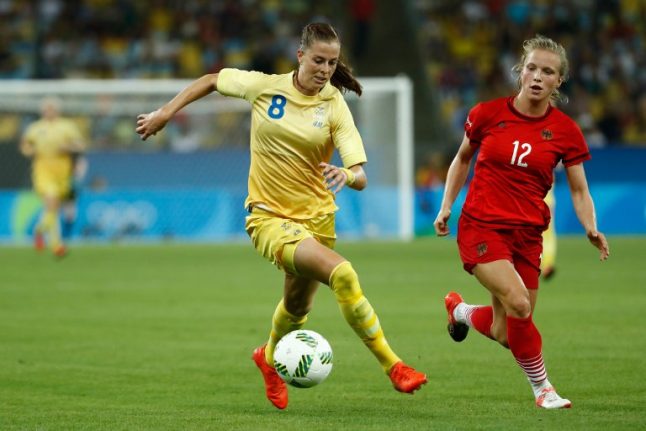 Sweden's striker Lotta Schelin (L) and Germany's defender Tabea Kemme vie for the ball during the Rio 2016 Olympic Games Gold medal match. Photo: Odd Andersen / AFP
Sweden have so far lost all 11 competitive encounters with the eight-time European champions, the last defeat dating back to Rio 2016 when they were beaten 2-1.
“We're always motivated when it comes to Germany — it's always tough games and it's always tight games,” said Schelin, who plays for Rosengard in the Swedish top flight, on Saturday.
“We have a bit of a feeling of a revenge when we look at the previous tournaments,” added the pony-tailed 33-year-old striker, who share's the captain's armband with Caroline Seger.
But she denied delving into history too much.
“We've been analyzing their team and what they're doing right now and what we can do to beat them,” said Schelin.
“I think that we just have to be here, in this moment, and think about the Euros and what we can do this summer to go all the way.”
Her German counterpart with the armband, midfielder Dzsenifer Marozsan, did not mind recalling the Olympic final.
“When I remember this final against Sweden and everything else at the Maracana stadium, it was unbelievable,” said the Hungarian-born, 25-year-old Olympique Lyon playmaker.
“But now it's a new tournament and I think it will be a really hard game. We start from 0-0.”
“We will see which team will win this fight because it's always a fight against Sweden,” added Marozsan.
The two teams face each other in Group B on Monday night, a day after the championships kick off with the Netherlands taking on Norway.