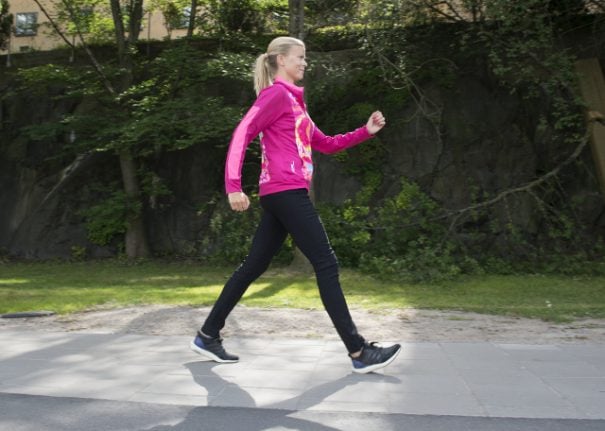 Swedes really do like to walk, a new study shows. Photo: Fredrik Sandberg/TT

According to the analysis of data from 111 different countries by Stanford University researchers, Swedes take 5,863 steps per day on average, while Brits take around 5,500 and Americans less than 5,000. At the bottom of the scale was Indonesia with 3,500 steps per day, and the average for all countries was 4,961 steps per day.

The study discovered what researchers dubbed “activity inequality” – a gap in activity between the most active and least active people in each country. In countries where there is a smaller degree of activity inequality people mostly walk a similar amount each day, while countries with a bigger gap show a much higher level of obesity.

Gender played a role in the differences in activity between countries, the study suggested, as countries with a bigger level of activity inequality also showed a bigger gender gap in activity levels.

The impact of gender on activity rates is what has inspired some Swedish municipalities to introduce gender equal snow clearing during the winter – a policy where the clearing of pavements and cycle lanes is prioritized over roads as women are statistically more likely to use them, while men are more likely to drive.

In order to understand what may cause activity inequality, the study looked for links between the walkability of cities and the activity levels there, and found that places with higher walkability scores showed lower levels of activity inequality. In walkable cities people are also more likely to walk during commuting hours as well as evening and weekend leisure time, according to the data.