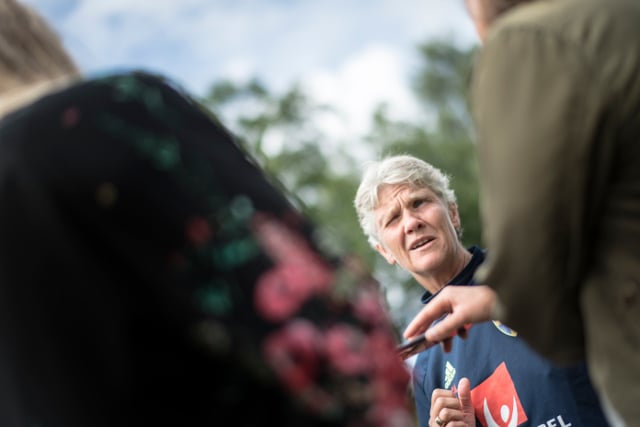 In Breda, Sweden picked up their first point in 12 competitive encounters with Germany, who have by now won the European title six times in a row and eight times overall.

In a reprise of the Olympic final from Rio, Germany kept Sweden under pressure in an uneventful first half but they failed to create scoring chances against solid defence.

Their dominance continued in the second half, with substitute Mandy Islacker the biggest threat for the Swedish goal.

In the 65th minute, she flicked a low cross from Carolin Simon just past the post.

Sweden then demonstrated their strength on the counter-attack but Stina Blackstenius failed to deliver following a superb run as her weak shot was blocked by keeper Almuth Schult who also stopped Lotta Schelin's breakaway effort two minutes later.

Seven minutes before the end, Islacker flicked a low pass from captain Dzsenifer Marozsan under the crossbar, but Chelsea keeper Hedvig Lindahl cleared the ball over the bar.

“In the first half we had a little bit too much respect for Sweden but we can be happy with the second half,” said Marozsan, an Olympique Lyon midfielder.

Sweden coach Pia Sundhage said she was happy with the result and “especially the way we defended”.

“It was a good start into this tournament, for us it has been crucial to get a good start.”

In Rotterdam, Russia's Danilova struck nine minutes into the game with a low shot from outside the box that took Italian keeper Chiara Marchitelli by surprise at her left post.

On 26 minutes, Morozova headed in Ekaterina Sochneva's corner to give Russia a 2-0 lead which Italy merely reduced through Ilaria Mauro's 88th-minute consolation goal.

Russia were avenging three 2-0 defeats from Italy at previous Euro tournaments, as well as a 3-0 loss in a friendly last December.

Russia's high pressing kept Italy at bay most of the time, and when that failed, their 19-year-old keeper Tatiana Shcherbak came to the rescue.

Shcherbak cleared a long-range left-foot blast from Marta Carissimi in the first half and then forced out a vicious long-range shot from captain Melania Gabbiadini, curling into her top corner.

Two minutes from the end, Shcherbak failed to react to a random pass which Mauro barely touched and which ended up in the Russian net.

But she produced another superb save in stoppage time, sending Elisa Bartoli's header onto the crossbar and the goal line, from which the Russian defence managed to clear it.

“They were able to get players in whenever they wanted to.”