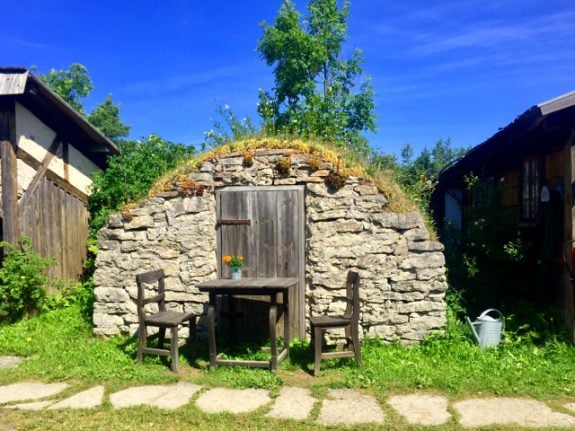 The Swedish island of Gotland is a little different and special in quite a few ways. Photo: Nicole Zerrer

Gotland is Sweden's largest island and also the largest island in the Baltic Sea. At the same time Gotland is its own administrative county which also includes the close islands of Fårö, Gotska Sandön and the Karlsö island (Lilla and Stora). Its almost isolated position in the middle of the Baltic Sea has helped create a few traditions and hidden gems closely associated with Gotland – some of which can't be found anywhere else.

When we talk about culture we tend to end up talking mainly about food. Since food is definitely an important part of traditions and culture, let's talk about the delicious Saffron Pancakes. If you're now picturing a flat, golden fried flour and egg dough, stop thinking. No flour, but rice and the size is more like a casserole. It's a special dessert that's traditionally prepared on the island. It contains porridge rice, egg, milk, almond, sugar and – of course – saffron. Traditionally it gets served with whipped cream and dewberry jam (salmbär, also particular to Gotland). Since Saffron Pancakes are served all day, it makes it a perfect choice for fika.

Wild horses running free in Sweden! They are not as well known as the Mustangs in the US, but they are cuter. Short legs, big eyes, and the only domestic pony breed in Sweden, the Gotland Pony (Gotlandsruss) used to roam freely on the island until humans took over more and more land. Today most of them are used in riding schools and for pony trotting. They are described as very well-tempered ponies, perfect friends for children. A herd of 80 animals living semi-free on the island still remains. You can find them in in Lojsta, they get rounded up five times a year for checking on the new born foals and selling some of the animals to keep the herd at the same size. You can go on a pony safari if you book a guided tour early enough. The Gotland sheep is native to Gotland and a descendant of one of the oldest Swedish sheep breeds, the Gute Sheep. It's a rather small sheep with short silver wool, which is sheared two times a year and is mainly used for felting. Chances are high you will find yourself sitting on a fluffy lambskin in a café or restaurant while exploring Gotland. Lamb meat is also very common in the Gotlandic cuisine. You can spot the Gotland sheep almost everywhere on the island, just pay attention to the little, moving, grey spots in the fields.

If you can think of Gotland's flag, you see the ancestor of Gotlands sheep – the domestic Gute Sheep, the animal on Gotland's coat of arms, with magnificent long, curled horns. The original Gute sheep is only rarely found nowadays in Gotland, although there are organizations trying to keep the tradition alive. With the silver wool the Gotland sheep is easy to spot. Photo: Tuukka Ervasti/imagebank.sweden.se

Gotland has a special role in Swedish politics. Since 1968 the Almedalen park in Visby is home to Almedalen Week for one week in summer. Political leaders, non-governmental organizations, unions and other types of lobby groups come together for discussions. All kinds of social issues get debated. During Almedalen Week, Gotland, and especially the town of Visby, is crowded with people. This political festival has also inspired similar events in Norway (Arendals week) and Estonia (Arvamusfestival) and Denmark (Folkemødet). Around Gotland's capital Visby you find the oldest city wall in northern Europe. Almost all of the original 3.6 kilometres of the medieval wall still surrounds the old part of Visby. The wall was built to defend the town of Visby in the 13th and 14th centuries and got some modifications in the 18th century. Only Visby, Stockholm and Kalmar had city walls in Sweden, which underlines the importance of this island town back in the day. Since 1995 the medieval town of Visby including the city wall is recognized as a Unesco world heritage. The city wall in Visby is the oldest and best preserved in Scandinavia. Photo: Emilie Asplund/imagebank.sweden.se

Writer, director and producer Ingmar Bergman, creator of movies such as 'The Seventh Seal' and 'Fanny and Alexander', is one of the Swedish celebrities most associated with Gotland. He grew up in Uppsala but moved later to Fårö island (which can be reached easily in 15 minutes by ferry from Gotland). Bergman also worked on Fårö and shot quite a few successful movies on this little island. The house where he used to live and died can be visited as well as a museum about him and his work, the Bergman Center. Other famous Swedish creatives who currently live on Gotland are for example the writers Jonas Jonasson ('The Hundred-Year-Old Who Climbed Out of the Window and Disappeared') and Håkan Nesser, well known for his crime novels. Ingmar Bergman was on of the most famous Swedish film producer. To learn more about him and his work you can visit the Bergman Center on the Fårö island. Photo: Nicole Zerrer

When travelling to Gotland you will understand how the medieval houses, the windmills on the fields, the beaches and forests and the landscape that stretches out for miles, could inspire shooting a movie here. As mentioned earlier the film-maker Ingmar Bergman loved Gotland and especially the Fårö island. He made two documentaries about the island itself ('Fårödokument' 1969, 'Fårödokument' 1979) and used the landscape for some of his movies like 'Trough a Glass Darkly' (1961) which was shot on Fårö.

Movies based on the work of Swedish children's author Astrid Lindgren have also been shot here, for example 'Pippi Longstocking' (1969) and 'The Brothers Lionheart' (1977). The Gotlandsdricka, or drikke, is an alcoholic drink, that has been brewed since the time of the Vikings. It can be described as a type of ale with a sweet and bitter flavour. It is dark yellow to golden coloured and contains juniper, malt, hops, yeast, water and sugar. Since the drink has to be consumed within two weeks after brewing and you can never be exactly sure how much alcohol it contains (between 3-12 percent alcohol by volume) it's not found in commercial breweries. The world championship in brewing drikke is held in Gotland every autumn.

The Gotlandssippa is a small purple flower that is native to Gotland. It blooms for just around two weeks from the middle till the end of April. The sippa belongs to the family of Pasque Flowers, also called wind flowers. Sand leek is a type of a wild onion. It can be found elsewhere as well, but grows almost everywhere on Gotland. Sand leek is one of the traditional ingredients in Gotland soup Kajpsoppa. To make the best leek soup, the sand leek is best picked in early summer. Soup made out of Sand Leek is a traditional Gotlandic recipe. Photo: Christopher, Tania and Isabelle Luna´s Photostream/Flickr

READ ALSO: The most Instagram-able spots of Gotland