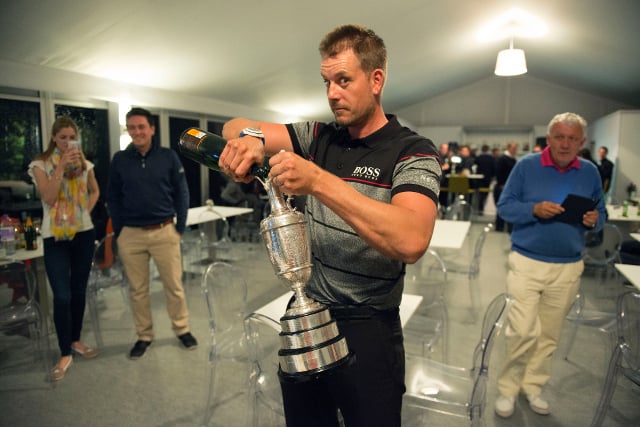 “I've made an official promise that if I ever win the Claret Jug again, I'm going skydiving with it.”

“And I don't know which is going to be harder, winning the Claret Jug again or going skydiving afterwards because that thought scares me a little bit,” Stenson said at Royal Birkdale on Tuesday.

“It won't stop me from trying to win it, though.”

Stenson handed back the trophy at Birkdale on Monday. The Swede beat Phil Mickelson on a thrilling final day to take the title at Troon in Scotland 12 months ago, ending his long wait to win a major at the age of 40.

As long as he doesn't worry too much about the prospect of throwing himself from a plane, Stenson insists he comes into this week with the pressure off as he prepares to tee off alongside world number three Jordan Spieth and South Korea's Kim Si-Woo in the first two rounds.

“I worked hard my whole career to be able to win that championship last year, and I can't really put the pressure on myself that I'm going to win it again,” he said after a practice round on a glorious summer's day in north-west England.

“It took a lot of chances to win that one, so I'm just going to go out there and do my best, really.”

Stenson has not been in brilliant form in 2017, missing the cut at both the Masters and the US Open as well as finishing tied 26th at last weekend's Scottish Open at Dundonald Links.

But he said the latter event will serve him well for his title defence on one of the great links layouts.

“I think for me it's crucial, both to play the week before the major is ideal for me, and also playing links because you just get in kind of that mindset of where you're going to land the ball and playing the three-quarter shots in the crosswinds,” he said.

“It's a bit of a different game. It will be like coming from clay going into Wimbledon; you wouldn't do that. It's certainly a benefit to play the week before, when that's possible.”