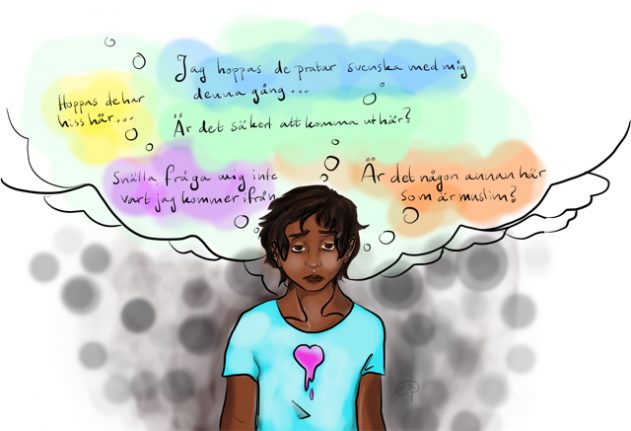 Through the project Making Space: Raising hidden voices of the Swedish LGBTQ+ community, the Swedish federation of LGBTQIA+ Students (SFQ) has had the opportunity to collect stories and information from around Sweden. We have talked with young LGBTQIA+ (an acronym to describe people who identify as lesbian, gay, bisexual, trans, queer, intersex and/or asexual or other identities) people with diverse backgrounds who have experiences of feeling invisible and powerless, as well as organizations that work with the LGBTQIA+ community.

Making Space was inspired to work with this after seeing that the image of the Swedish LGBTQIA+ community was very white and very Swedish-centric, which didn't reflect our own experiences as newcomers to Sweden. With the project we wanted to raise the voices of students that are from otherwise under represented groups to illustrate the existing racism and stereotypes within the Swedish LGBTQIA+ community.

To do this we conducted in-depth interviews with both international and local students with a non-Swedish and/or non-white background. We interviewed people who aren't used to talking about themselves, and in many cases they were so relieved and happy to finally be heard and to have a space to tell their perspective. There were people who had been exposed to both racism and violence because of who they are.

READ ALSO: The Local interviews Amir Ashour, who runs the first LGBT community in Iraq and Kurdistan from Malmö

Sweden is a country that many people that are a part of the LGBTQIA+ community across the world look up to and dream about living in. This is because Sweden has a reputation for being open, accepting, and liberal when it comes to accepting a diversity of gender and sexuality. This leads to assumptions within Sweden that “LGBTQIA+ equality” has been reached, and at the same time leads to people from other parts of the world moving here in hope of a life lived out and proud. However, even though Sweden is indeed one of the best countries in terms of equality, the assumption that we have reached complete equality is wrong!

Interestingly, what we found from our interviews and our work with Making Space is that those of us living in Sweden with a non-Swedish and/or not white background and are a part of the LGBTQIA+ community experience in some cases somewhat similar, and in other cases very unique experiences.

One such story from one of the project leaders shows the struggles that can be faced:

“I am a Muslim person who is often perceived as a woman. I don't wear head scarves and I follow Islam from an inclusive perspective. However, as I don't wear a headscarf and I have a genderfluid expression, I am assumed to be an 'atheist' by both my own community and by the white Swedish community. Or, I get questions such as how can I be both Muslim and queer? Frankly speaking, I have got such questions and expressions from both my white friends and my not-white friends.”

During our interviews we spoke to participants who said they have had teachers from SFI (Swedish for Immigrants) that made their LGBTQIA+ identities invisible. We heard from a bisexual activist about how difficult it has been to be taken seriously by Swedes, or how difficult it was to bring up issues regarding bisexuality even within the people who intend to work with LGBTQIA+ issues. We had participants who were excluded by their white-Swedish classmates during compulsory group work due to the colour of their skin, and so on.

We have heard from participants that were born here in Sweden but constantly experience reminders that they are people of colour and therefore non-Swedish due to the white normativity that exists here. All of our not-white participants who are born in Sweden shared with us that they constantly face questions such as “Where are you from?” to which an answer such as, “I am from Umeå”, is not enough. The person asking always wants an explanation for their non-white skin colour, even when the person was born in Sweden and speaks Swedish. We also had participants who have been subjected to direct violence stemming from racism.

READ ALSO: 'In general in Sweden right now there's too much emphasis on picking out someone as being different'

Some of us are facing intolerance and prejudice based on our gender identity, gender expression, and/or sexuality, whilst at the same time we are also being subject to white normativity and even racism.

Another interesting finding from our project was that our level of privilege or lack of privilege also varies based on whether we are newcomers, if we are second-generation Swedish citizens and/or if we have already been exposed to or have access to LGBTQIA+ activism and anti-racist activism. This is a complex project as we are dealing with several kinds of intolerances stemmed from different perspectives which is the product of imbalance of power in different layers of our lives. Moreover, this is a short-term project so we did not have enough time and resources to keep digging further even though the amount of stories, reflections, and experiences have astonished us.

We are now writing a report that reflects the results of the project and will contain suggestions for us (SFQ) and other LGBTQIA+ organizations on how to be more inclusive so that we can create a safer Sweden for all LGBTQIA+ people regardless of their culture, ethnicity, religion, or skin colour. We are also holding events at different pride festivals around Sweden this summer and will be publishing other materials about our work, in the hope of sharing what we have found and to make the LGBTQIA+ community more aware of the diversity within it.

Ultimately, we hope to see safe(r) and more inclusive spaces for everybody in Sweden.

Article written by Rachel McDonald and Kabir from the SFQ Project Team.