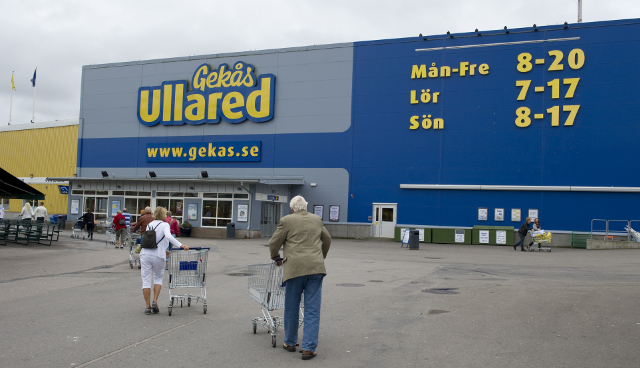 The man, who is believed to be mentally ill, drove a car at speed towards a group of people outside the busy Gekås store in Ullared at around 8pm on Tuesday night.

Police arrested him at the scene and subsequently handed him over to compulsory care, though he is still being treated as a suspect for the Swedish crimes of inflicting damage, causing bodily harm and devastation endangering the public.

“On the grounds of his mental health the prosecutor decided to let the hospital take care of him. He's still suspected of the crimes, but he's at the hospital receiving compulsory care,” police spokesperson Tommy Nyman told The Local.

“Please, don't just write 'terror', don’t use that word,” Nyman said when The Local called explaining that we wanted to check the veracity of some sensational sounding reports about the incident in international media. It is not in any way being treated as a terror related event, for example:

“This is a sick man who has a completely different motivation. He has a motivation that neither you or I could understand.”

A bomb squad checked the car at the scene according to procedure but did not find any explosives, Nyman noted, pointing out that rather “there was a dog”. Police have so far been unable to verify eyewitness claims that the man was holding a gasoline canister meanwhile:

“The information I have is that after driving into the wall the car leaked petrol, so the conclusion then was that it was caused by the car hitting the wall. Once all of the witness statements have been pulled together we can look at that, but I don't have any information about it in any case.”

Nyman was able to confirm that only one person received minor injuries in the incident, rather than two as was initially thought.

“Yesterday we thought it was two people injured, but I think we've now concluded it’s one person who was injured, a woman who jumped out the way but her shopping cart hit the car and she received some scrapes. So it only seems to be one.”

“Thankfully no one was hurt any more than a scrape,” he concluded.

Speaking to Swedish tabloid Aftonbladet, the pregnant woman who was almost struck by the car explained that she didn't realize the man was going to hit her until the last second.

“I was standing waiting for my daughter who was inside buying chewing gum from a machine. Then I saw a car coming at full speed. I thought he was joking with a friend. He was beeping his horn the whole time. When he got close enough I realized it wasn't a joke,” the woman whose first name is Helena told the tabloid.

“It all went in slow motion. I didn't understand before he was too close. Then he hit my shopping cart.”