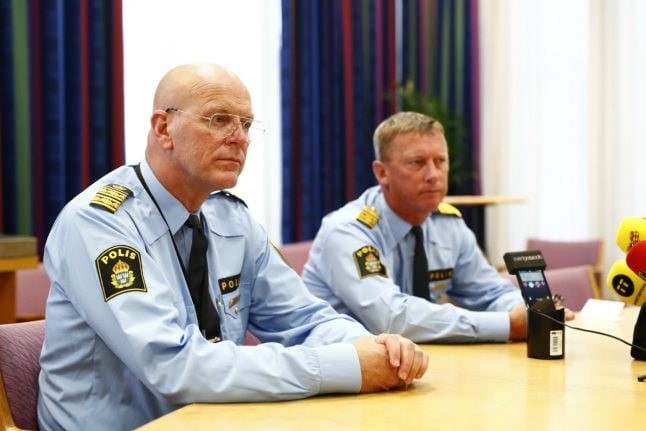 The man was given first aid on the scene by colleagues but did not survive, reports news agency TT.

The killed policeman was 44 years old and described as a well-liked colleague with many years of experience, according to the report.

“Meeting colleagues who were there responding to the situation really brings home how much this has affected them. It feels very real when it’s a colleague known to many and when you are at the scene trying to save his life,” Erik Nord, chief of the Greater Gothenburg police district, told TT.

At 10:30am on Sunday an armed robbery was reported at a tobacco shop on the Kaggeledstorget square in Gothenburg. Four robbers fled the scene in a silver vehicle which they subsequently abandoned to continue on foot.

The 44-year-old officer responded to the alarm together with a colleague and were on their way to the scene when they saw the men about to cross the E20 near the Ånasmotet service area. The policemen stopped their car and the 44-year-old, who was on the opposite side to the suspects, was then hit by an approaching car.

The driver of the car who hit the policeman is a young man who has been left in shock by the accident, according to TT’s report.

“Initially we are dealing with this specific incident. But the Police has systems in place to identify dangerous conditions for our working environment,” Nord said.

“In my experience, traffic is absolutely one of the most dangerous areas for us,” he added.

Under 100 police officers have died in the course of duty since 1900, writes TT. Police flags have flown at half-mast across the country since the officer’s death was announced.

“It is with deep grief and sadness that we have received the news that a colleague has lost his life while serving. Our thoughts go to his family, nearest and dearest and close colleagues. We are reminded that a police officer’s work is sometimes hazardous and dangerous and work to minimise risks must always be a priority,” Narional Police chief Dan Eliasson wrote on the Swedish Police website.

Three of the suspected robbers were apprehended shortly after the accident, and the fourth was arrested half an hour later, reports TT.

The vehicle used to flee the crime scene has been seized for technical examination and three investigations – into the crime, the accident the nature of the dangerous working environment that cost the officer his life – have been initiated by the police’s Work Environment Authority (Arbetsmiljöverket).