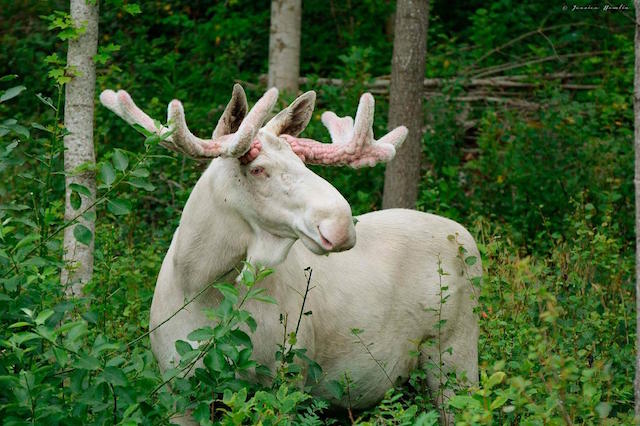 Photo: Jessica Hemlin
Hemlin, 24, was just about to get into the car parked outside her home near Munkedal, south-west Sweden, on Monday when she spotted the white elk, GP reports. She quickly ran and grabbed her camera, and managed to capture the elk in a series of photographs.
The Local called up Hemlin to ask what it feels like having such an unusual animal show up in your back garden.
“It's really special. It's a powerful feeling,” Hemlin told The Local.
“You can get really close to it as well,” she added. “You get a bit of an adrenaline rush – these are big animals when you walk up to them!” Photo: Jessica Hemlin
READ ALSO: Elk gang terrorises joggers in Swedish town
Since Hemlin first spotted the rare elk near her house around three years ago, it has been coming back intermittently. In 2016, Hemlin managed to capture it in a video, as seen below.
This week, it was accompanied by another, regular brown-coloured bull elk, which kept in the background while the white elk posed for the camera, Hemlin said.
READ ALSO: Elk or moose? Here's our answer
Word has spread about the rare elk making appearances in Hemlin's neighbourhood, and she has started noticing people turning up in cars on the road near her house in the hope of catching a glimpse of the white elk.
“They often want to take pictures, and as they only have their phones, they try to get close to it. And then they scare it off!”
WATCH: Elk calf chases Swedish golfer Jessica Hemlin
A keen amateur photographer, Hemlin nowadays always keeps her camera at hand in case the white elk should make an appearance.
“I've put it on top of the chest of drawers, it's always sitting there now so that I can quickly go in and grab it,” she told The Local.