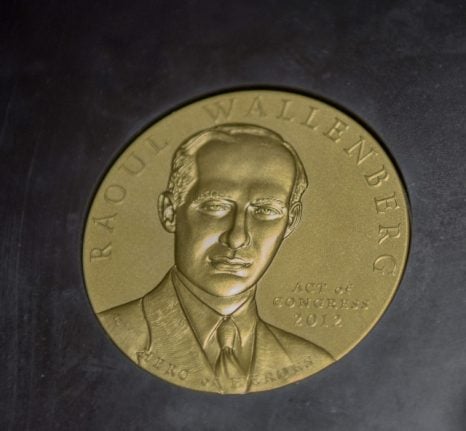 Wallenberg, who saved thousands of Jews during World War II, was posthumously presented with a Congressonal Gold Medal by the US Congress in 2014. Photo: Maja Suslin/TT

“The relatives of Wallenberg filed the lawsuit at the Meshchansky court in the Russian capital on Wednesday,” their lawyer Ivan Pavlov told AFP.

The Wallenberg family “wants to force the FSB (the successor to the KGB) to give it access to the originals of the documents” that concern Wallenberg's fate, Pavlov said.

He said that Wallenberg's relatives have made many attempts to gain access to the FSB archives dating back to the Soviet era. These were either rejected or the documents they received were incomplete, Pavlov said.

“This case isn't just about the possibility of restoring the memory of a remarkable person. It is also yet another attempt to fight the inacessibility of the FSB archives,” the lawyer said.

As a special envoy in Nazi-controlled Hungary, Wallenberg issued Swedish identity papers to tens of thousands of Jews, allowing them to flee occupied Hungary and likely death.

But when the Soviets entered Budapest months before the war ended, they summoned Wallenberg to their headquarters in January 1945, after which he disappeared, aged 32.

In 1957, the Soviet Union released a document saying Wallenberg had been jailed in the Lubyanka prison, the notorious building where the KGB security services were headquartered, and that he died of heart failure on July 17, 1947.

But his family refused to accept that version of events, and for decades have been trying to establish what happened to him.

In 2000 the head of a Russian investigative commission conceded Wallenberg had been shot and killed by KGB agents in Lubyanka in 1947 for political reasons, but declined to be more specific or to cite hard evidence.

Last year Sweden officially declared Wallenberg dead, but his body has never been returned to his family.