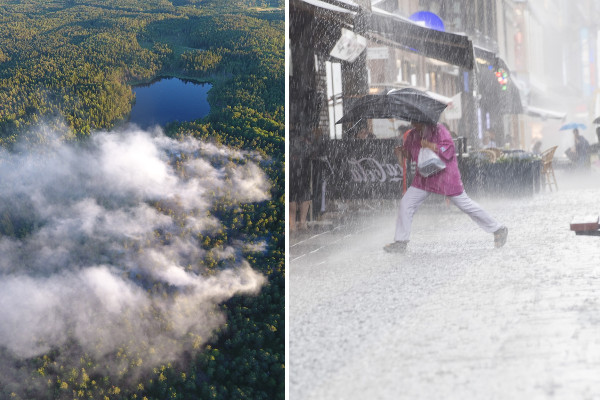 Forest fire warnings are in place in some parts of Sweden, while there's a risk of torrential rain in others. Södertörns brandförsvarsförbund & Fredrik Sandberg/TT

National forecaster SMHI has issued a class one weather warning (the least serious on a scale from one to three) for heavy rain in the south of Sweden including Skåne, Gotland and Kalmar, where as much as 35mm could fall over Tuesday night.

That means there's a risk of overflowing stormwater drains and of cellars flooding, according to SMHI, which issued the warning because a minimum of 35mm is predicted to fall within a period of 12 hours.

At the same time however nearby Östergötland and Jönköping continue to have warnings for forest fires in place, where the risk of is said to be “high or very high” due to an until now unusually dry Swedish summer.

The forest fire warnings also stretch north into Dalarna and even the Norrbotten coast. In two out of Sweden's three historic “lands” there was 50 percent less rain than is usually the case in July, while northernmost land Norrland had less rain than usual in June.

On Monday afternoon a forest fire broke out in the Uppsala area, while there have also been fires in Eskilstuna and Norrköping in the last few days.

Chasing the elements in the forest of Lunsen. A wildfiref has a big impact on the environment. Some are positive; there are certain species of flora and fauna that only occurs in burnt areas. However, when the fire is aproching populated areas it is crucial to have the flames under control./M #wildfire #forestfire #bushfire #skogsbrand #forest #burn #burnt #trees #fire #firefighter #firefighting #intothefire #nature #outdoors #chasingtheelements

The lack of rain combined with a series of winters with light snowfall has also contributed to Sweden's groundwater levels dipping below normally in several large reserves this year.

Frustratingly for Swedes however despite it being a dry summer it hasn't been a particularly warm one: according to SVT Sweden's 27.2 degree Celsius monthly high for July was the lowest maximum temperature the country has registered that month since 1979.